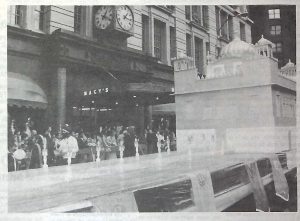 At 38th, 39th, and 40th Streets between Avenue of the Americas and 7th Avenue across Broadway in Manhattan.

Start from 38th Street on Broadway

End at 14th Street and Broadway into Union Square Park (south side) opposite Macy’s.

Thousands of Sikh men, women and children will march together led by the five beloved ones (Panj Piare) and the Sikh Holy Book (Guru Granth Sahib) on a colorful float depicting the Golden Temple.

There will be several other floats depicting Sikh philosophy, heritage and tradition. They will be accompanied by marching bands and interesting items.

Highlights Of The Parade

A reviewing stand will be set up at the Herald Square Park on 34th street and Broadway where leadership from religious interfaith groups State and City political VIP’s and Sikh leadership in the New York tri-state and adjoining areas will review the parade.

Parade will terminate at Union Square Park (14th Street and Broadway) where participants will be addressed by guest speakers and langar will be served.

Come Join Us! Bring A Friend!