The Sikh Temple in Stockton, California

Whereas the history of the Sikhs in the U.S.A. starts from 1906, the history of the Sikh Temple, Stockton, starts when Baba Jawala Singh and Baba Wisakha Singh, the revolutionaries of the Indian freedom, reached California in 1908 and owned a Ranch near Sacramento by the side of the Holtville River where they used to do Gurbani Kirtan (singing of the songs from the Sikh Holy Scripture) as well.

In 1912, the present lot of the Sikh Temple which was just like a pond, was purchased and filled with earth and levelled by our men. At the place of Bhai Shaib’s present residence, there existed one room at that time in which Guru Granth Sahib was installed and Gurdwara started. In 1912, the Pacific Coast Khalsa Diwan Society was established which collected money from our people, and constructed a big hall in 1916 at the place of the present Sikh Temple with the present basement underneath it, where in Guru Granth Sahib was installed. 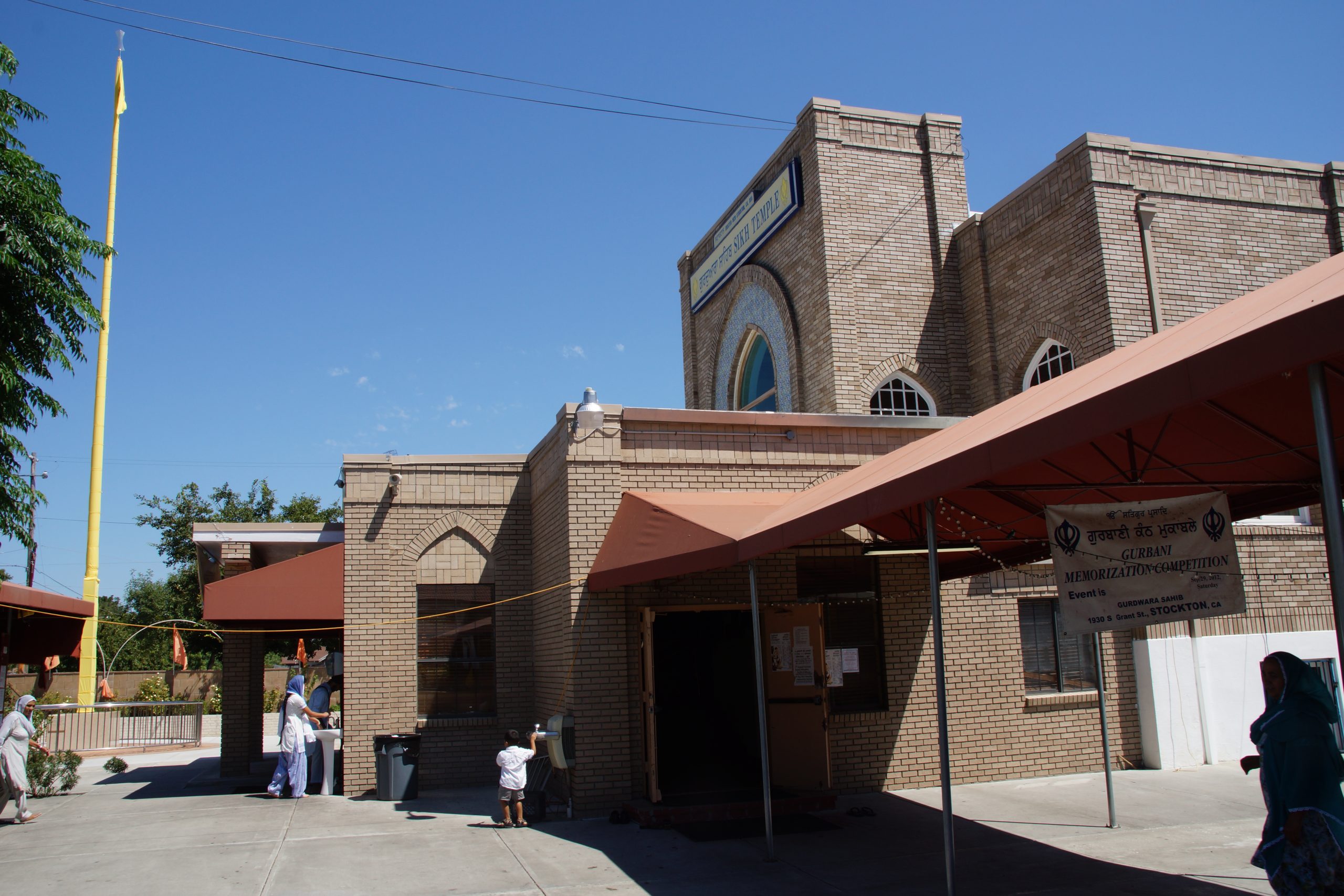 In 1929, the people moved the wooden building to a place near Bhai Sahib’s residence and a new brick building was erected on the previous basement which is the present Temple. The old building was turned into a residence wherein GHADARI Babas, students, seasonal cannery workers, visitors from India and pilgrims began to live.

This old building has been remodeled which now contains one big Library Hall and three living rooms with three bathrooms attached to them. The kitchen in the basement has also been remodeled and has been doubled in size. A store room has also been added to it. The old bathrooms have been brought outside and are contained in a very nicely constructed separate building.

In 1912 when the sikh religious flag was hoisted for the first time, the American people protested and police reached at the spot. Sant Teja Singh (Double M.A.) was present at that time in the Congregation. He lectured the public and police in English and told them its religious importance to the Sikhs. Thereupon everyone was satisfied.

The Pacific Coast Khalsa Diwan Society and the Sikh Temple, Stockton have remained for many decades a center of the Sikhs of California. Most of the Sikhs lived near around Stockton at that time. Those who became prosperous, purchased ranches of their own in Yuba City, Fresno, etc. and moved to those places. Still, they continued coming to the Sikh Temple on almost every weekend.

The other Sikh Temples of California are of recent origin. In spite of the fact that there are many Sikh Temples now, the historical importance of the Sikh Temple, Stockton is still untouched and every Sikh within United States and out of it, look towards it with respect and devotion. It has remained the center of GHADAR movement and as such is known to everyone in India too.

The Gurdwara Committee, Stockton is still very keen to give lead to the Sikh world and is very particular in the implementation of the Panthic program started by the Panthic leaders of the Punjab.

The Head Priest of the Gurdwara Sahib, Stockton is Bhai Shaib Wadhawa Singh who is M.A. (Punjab) and is a devoted gursikh. He gives very accurate knowledge of the Sikh religion in English to the people of other faiths, tourists, scholars and students of the Universities, Colleges and Schools that come to visit the Temple. He has written two spiritual books namely (I) ‘NAM KI HAI?’ (What is a Name of the Lord?) and (II) ‘ATMAN KI HAI?’ (What is a soul?). He has been working here for the last eight years.

The Assistant Priest Bhai Sahib Nahar Singh is also a literate devoted gursikh. He teaches Punjabi to the Sikh children and looks after the needs of the visitors that come to visit the Temple. Bibi Swaran Kaur, wife of the Head Priest knows Gurbani Kirtan (singing of Holy songs). Bhai Sahib Wadhawa Singh, Bhai Sahib Nahar Singh and Bibi Swaran Kaur form the Kirtani JATHA of the Gurdwara Sahib and on every evening and Sunday morning Kirtan is performed and others from the sangat also join in its performance.

Almost every Guru-day is celebrated in the Gurdwara Sahib. On the big celebrations of Guru Nanak’s birthday, Guru Gobind Singh’s birthday and the birthday of the Khalsa (Waisakhi) the number of congregations goes up to nearly two thousand people. It being an historic place, people come from distant places to attend such celebrations.