When BJP government came into power a second time with full majority, they started passing new laws, without much consultation. Mr. Modi would come up with some ideas and announce them like a Dictator. In September 2020, his government passed a Farm Bill which was not in favor of farmers. He was going to pass the control of farming to his corporate bosses. Farmers also wanted MSP (Minimum Sale Price) on their products, which was going to disappear under the new laws. They tried to convince the farmers that now they could sell their crops to anyone in any place at any price. The states which were ruled by BJP agreed to this law without saying anything.

Mainly Punjabi farmers started agitating. They started to protest in the state and finally in November 2019 they decided to take their protest to Delhi. In order to do that they had to pass through Hariyana, which was a BJP-ruled state. Mr. Khattar, CM of Haryana assured the Center Government that he wouldn’t let the Punjabi Farmers reach Delhi. To assure that he put state police on the main highway. They blocked the road, dug trenches in the road and used heavy machinery to block it with barriers when farmers arrived.There they were beaten with sticks. Water cannons and rubber bullets also were used. A young man, Navdeep Singh, from Haryana, jumped from his tractor and climbed the water cannon, shut off the cannon and jumped back on his moving tractor trolley. It was live on national TV. 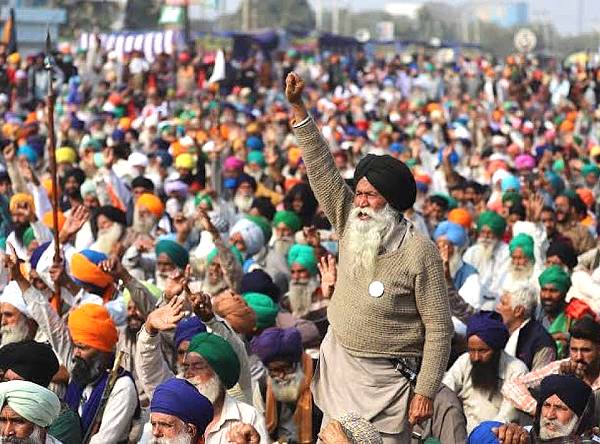 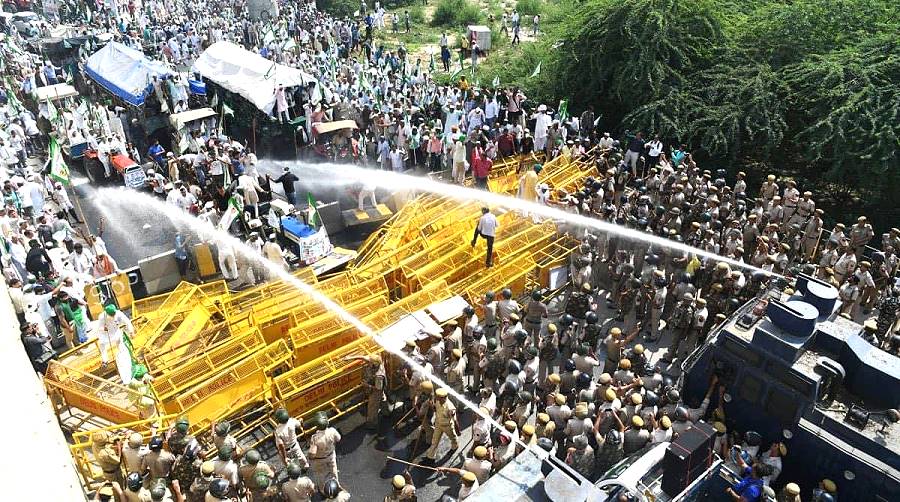 In Spite of all these hurdles farmers got past the barriers, filled the ditches in the road and kept on marching towards their destination. Many were badly hurt and many were arrested by police. When they reached the Delhi border the highway was blocked there, too. They settled on the side of the road and started building their camps as news of police torture of farmers spread. Farmers from Haryana, Rajasthan, UP, and Utrakhand started moving towards Delhi. In large numbers the government blocked all the entry points into Delhi. They set up their camp on the roads, too.

The Government was under the impression that winter was coming and they thought the farmers would leave in a few weeks. Talks were started, but the Government did not budge. The farmers’ main demand was for the government to take back those laws. Government was willing to make some changes but refused to take them back. After a few weeks of talks, things came to a stand-still. Then January 26th came (Republic Day of India) and farmers also wanted to participate. Reluctantly Delhi police gave them permission to proceed on outer roads.

A peaceful procession started but police blocked those roads. There were fights with police and the farmers were able to push through the obstacles, and a group of farmers reached Red Fort. A young man put the Nishan Sahib (Sikh Religious Flag) on an empty pole on Red Fort. Indian Media (which is pro government and called Godi Media) made a big issue that terrorists occupied the fort. Using that as an excuse Delhi Police went into action. They arrested a large number of farmers. They also cut the power and water supply to the camps. Some farmers started moving too.

On the UP boarder, Mr. Rakesh Tikait was there and Police reached there to arrest him. Then he came to know that after he was arrested. The Police also planned to beat the rest of the farmers, of which quite a few were Sikhs. For this purpose police had brought sticks and a large number of RSS Goondas. On a few other campsites they tried it too. Mr. Tikait refused to surrender. He cried on the LIVE TV and social Media channels and refused to surrender to the police. He said he wouldn’t drink the water until the water came from his village.

During the night a large number of farmers came to join him. Ladies brought water on their heads in pitchers. And by January 27th, all camps were filled with even greater capacity than before. Then they waited to see if the game would start again, to see who would blink first. Farmers dug in for the winter and set up better camps. Then they dug wells for water and brought in generators. Delhi Gurudwara committee and many other Sikh organizations started supporting them. They only had to say what they needed and it was quickly arranged and given.

Mr. Rana Ji of the Golden Hut Restaurant opened the doors of his hotel for the farmers. Every day for the whole year he provided free food, milk and shelter to thousands of farmers. The Indian government tried to cut his business off, and set up a wall on the highway hear his restaurant, but it did not deter him. He stood with farmers until the last day. I salute him. 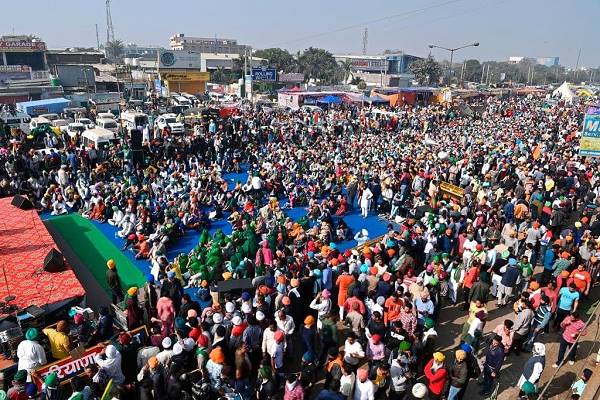 On January 26th a young man, Mr. Navereet Singh, was on a tractor and he was trying to push through the barricade. He was shot in the head, his tractor fell upside down, and he died on the spot. 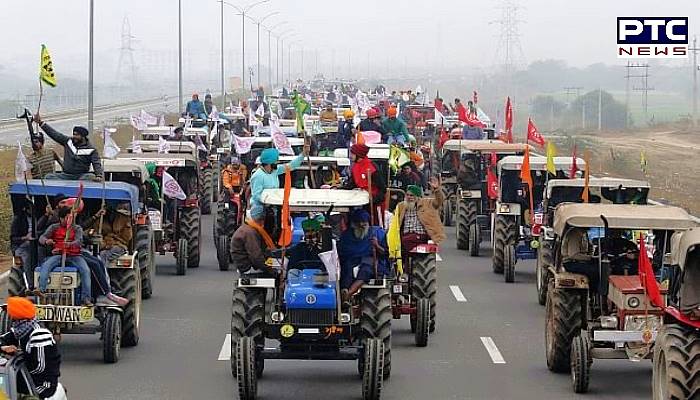 Dr. Swaiman Singh from Ohio went to visit Punjab in November. He went to the protest site just to see. After seeing the problem they faced, he stayed there. He started ‘California Village’ and a free clinic for the farmers. Many local doctors also joined him. One doctor from Rajasthan quit his job to join the protest. Beginning January 26 they provided help to the injured. That doctor and his team were beaten by police too, while they were serving the injured.

For the whole year it went through ups and downs. It was attacked by the goondas with the help of police and they threw stones and started fires in the camps. The police were watching and did nothing. In fact, police beat a few Sikh boys very badly when they opposed and tried to protect the camp. One policeman put his foot on the face of fallen Sikh boy.

One night, a few RSS workers came to California Village to beat up Dr. Swaiman. Soon the news spread. Before they could touch Dr. Swaiman, a large number of farmers rushed to his defense and the attackers ran away.

During first few days of the camp, a saint committed suicide, seeing the misery of the farmers. Many farmers died in camps, and some died on the road while coming and going to Delhi. By the end of the year almost 750 farmers had lost their lives. Neither Mr. Modi, nor any government representative said a single word of sympathy for those who lost their lives.

Many organizations like Khalsa provided aid, and Mr. Oberai’s organization helped the farmers. Local poor children would come to the camp for free food and they also started a school for them. Young girls felt safe in the neighborhood of the camps.

Nihang Singh also played a great role in all this. They provided protection to the camps when needed. One person joined their group and he insulted and destroyed the holy Granth Sahib. Nahangis caught him and beat him up. His arms were chopped off as a punishment. Then they surrendered to the police.

Finally on Guru Nanak’s Dev Ji’s Gurpurab (birthday), Mr. Modi went on television and announced that he will take back those laws. He did not call the farmers or call any meeting at that time, though he did later on. When the laws were taken back, farmers went back to their villages as winners. But some who came to the camps never went back. On the average there were two Deaths for every day of the protest.

Youth played a very active role in the protest. Youth leadership like Lakha Sidhana and Deep Sidhu and many others like them helped at every step. It was because of them they were able to overcome the hurdles along the way. Old leadership tainted Deep Sidhu’s name and he had to leave camp after 26 January and was arrested by police. A young girl from Haryana Poonam Pandit gave good replies to the media. There was a young boy 12-13 years old from Rajasthan, an excellent speaker.

Finally when they left, people missed them. There was an emotional farewell. It was success but also separation. People had fallen in love with each other. Hindu, Sikh, Muslim, all were eating and sitting together. Whatever supplies were left over they distributed those to the local people of Delhi. They were showered with flowers, one thing which is rare in India. Before the farmers left they cleaned the camp area and left it in better shape than when they got it. This was the biggest and longest protest in recent times. Hopefully, it will affect the future of Indian Politics for good.

Mr. Tikait arose as a good leader and he was awarded the 2021 ICON award of London. I saw on television when the farmers were going back. One farmer was dragging behind his tractor a big slab of cement which was used by Delhi police as a roadblock, as a souvenir. He said he would put this in his village as a memorial to this protest. That reminds me when Sikh won the Delhi throne, they were leaving for Punjab after making arrangements with the King of Delhi. They were told to take anything from the Red Fort, they did not choose any diamonds or pearls, but instead they pulled a big slab out of the Delhi throne and dragged it behind their horses all the way to Amritsar Sahib. That slab was put in the Golden Temple area, so that every visitor to Harimander Sahib walks over it, and it is still there in possession of the Sikhs.