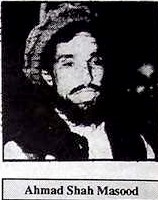 Speaking to newspersons a Charlkar 60 km from Kabul Masood said that Afghanistan’s relations with India would be viewed in the context of “New Delhi’s continued and strong support to the Najibullah Government.” When asked whether the Mujahideen interim council would honor the several bilateral agreements with India Masood said “each agreement would have to be carefully analyzed.” cannot say for sure whether we will honor the commitment made by the previous communist regime.”

Masood however assured India that the Mujahideen Government would follow the “rule of law” in determining its relations with India He made it abundantly clear that the “rule of law” would be the “short Jaw of Islam” Denying that Islamic fundamentalist was taking hold in Afghanistan. Masood said “We are not fundamentalists but we want to run the Government like in a Islamic state with the sharat the supreme law.”

The Afghan Mujahideen leader remarked that “close relations with Pakistan will not be at the expense of any other country but yes we will have friendly ties with Pakistan.” When told that the Pakhtun Afghan “Mujahideen leader Gulbuddin Hekmatyar had rejected the 50member Afghan interim council Masood angrily retorted by saying “He (Hekmatyat) is a creation of the media which has glorified him. If he would not have been glorified there would have been no such rejection from him.”

Masood ruled out an attack on Kabul by the Hekmatyar forces saying “It would be a terrible mistake on his part to even think fit.” The Afghan leader did not support the comparison of a future Afghan Government with that of ran’s Masood declared “Afghanistan will not be like Iran” and added “We want Peace in Afghanistan Fourteen years of war have ruined our nation and its people. Enough I enough No more war. No more talk of even war and no role models that do not support peace.” Iran however would be an important friend of Afghanistan Masood announced. “A large number of Afghans are Shias and therefore it is but natural that Iran will play an important role in Afghanistan.”