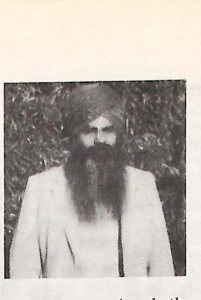 World Sikh Organization is preparing a foolproof case for the effective involvement of World Bodies like Human Rights Commission, International Red Cross and International Court with the urgent need and plight of the Sikhs in India. World Sikh Organization feels a little handicapped in collecting a verifiable data of the dead, missing and badly injured or invalidated Sikhs during the past three years of incessant repression and genocide. It is requested that exact details of those relatives, friends or acquaintances that have fallen victim to the communal frenzy of the government and the majority community be communicated to the World Sikh Organization for follow-up action.

It would also help in shaking the World bodies out of their complacency if a large number of letters are addressed directly to them highlighting the unprecedented atrocities against Sikhs. So far Sikhs had never seriously considered the necessity of developing a media of their own. They have lived practically without any effective voice. With a characteristic disdain they would dismiss the idea of having a representative newspaper whenever and from whatsoever quarter it was mooted. At best they would reluctantly offer a lukewarm response. The traumatic experience through which the Sikhs are passing in India has fractured their complacency into millions of mirrors, each unfolding the dreadful tale of continued agony and suffering. Sikhs have suddenly awakened to a sense of urgency. Some perceptive individuals and groups are also making praiseworthy efforts to take up the challenge. But they have not made much headway despite their honesty and commitment.