Tony Coehlo Assures His Continued Support To The Sikhs

Tony Coehlo Assures His Continued Support To The Sikhs 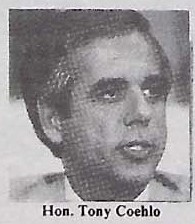 MODESTO, Ca. Hon. Tony Coehlo (Democrat) Congressman from the 15th district of California declared here at a special fundraising lunch hosted by Sikhs that he would “never tum his back from the Sikhs and others facing similar predicament. The problems must be sorted our through discussion and when you suppress one side you suppress discussion. This is not fair. This is not democracy,” he said.

“Indian government is concerned that I keep speaking out for the Sikhs. I speak because the Indian government is not giving the Sikhs opportunity to present their case. I, therefore, propose to speak out for them”, he declared amidst cheers. The lunch was held at Chateau de Ville in Modesto, California and was attended by a large number of Sikhs, S. Harmohinder Singh Bhullar, and Manager World Sikh News, acted as the Master of Ceremonies. The gathering was treated to a thought provoking speech by S. Gurdial Singh of the Radio Panth Khalsa who, while giving his analysis of the Punjab situation, called upon the newly released Sikh High Priests not to deviate from the chosen path of Khalistan if they want to avoid the line adopted by both the Akali Dals.

Mr. Bhullar in his inaugural speech expressed gratitude to Hon. Coehlo on the behalf of the Sikhs for espousing their just cause. He recalled the excellent role of the Congressman in championing the cause of human rights and civil rights,

Dr, Gurmit Singh Aulakh, President Council of Khalistan, read out his well worded welcome address in which he pointed out the concern shown by Mr. Coehlo over persistent reports: alleging the continuing disregard and systematic abuse of the most fundamental rights of the government of India. Dr. Aulakh also pointed out the bipartisan support to the Sikh cause. He specifically mentioned the names of Hon. Robert Dornan and Hon. Ronald Dellums, who, he said, probably have agreed on nothing in their lives, yet both have stretched out a hand of help to the Sikhs in their need.

Article extracted from this publication >> March 25, 1988