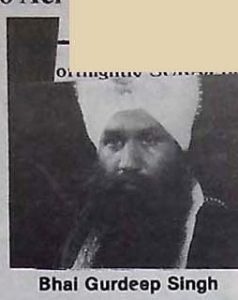 DURAN, Cologne, Germany: The International Sikh Convention, called by Babbar Khalsa at Duran (Cologne Germany) on January 30, 1988, called upon the Sikh community ‘of the world to fight untidily for achievement of Khalistan which was described’ as an objective of the Sikh Panth.

This convention was attended by 300 delegates from nine counties, including Sweden, Holland, France, Denmark, Germany, Norway, Belgium, U.S.A. and U.K.

The convention also assured total support for the achievement of these objectives.

The convention praised its work in the past and pledged full support in the future. s

This resolution was seconded by the President of Damdami Taksal unit of Germany.

The convention resolved to have complete unity among all the organizations committed for achievement of Khalistan for the glory, of the Panth.

Bhai Gurmej Singh Babbar, the Prime Minister of Government of Khalistan, appealed to the governments of the world to provide refugee status to those Sikhs who had fled from India the fear of execution by the government of India. Bhai Gurmej Singh announced that a large number of Sikhs ranging between 6000 to 7000 have been seeking refugee status in various countries of the world.

Earlier, the Bhog of Sri Akhand Path of Sri Guru Granth Sahib was solemnized on January 30. At this function, Amrit Snachar was organized by the representatives of U.S.A., Bhai Gurdeep Singh Sohal, President Gurdwara Sahib Fremont (USA), and Bhai Ajit Singh Bainiwal, where 25 Sikhs got the blessings of Guru Ji, after receiving “Dat” of Guru’s Amrit. It is worthy to mention that Bhai Gurdeep Singh Sohal and Bhai Ajit Singh Bainiwal have been striving hard to organize Amrit Sanchar programs in U.S.A. and abroad, They also arranged Amrit Sanchar at Lakhpat Rai Jail, Lahore, for the benefit of these Sikhs confined in jail on account of different charges against them.

Perilously to follow health news may occasionally end up with a bad case of the blahs. Consider the following:

In the interest of combating hypertension, the American Heart Association has been urging us since 1978 to throw away our saltshakers and reduce the amount of sodium we eat. Yet recently, Dr. Jeffrey Cutler of the National Heart, Lung, and Blood Institute stated that “we don’t know” whether any changes in diet or lifestyle will actually prevent high blood pressure. Furthermore, several seem to show that some substance in vegetables blocks the hypertensive effects of salt, and that lack of calcium may be as important a factor in hypertension as excess sodium.

Relying on a government report on osteoporosis and calcium intake, many health publications recommended calcium supplements as one way of preventing this bone thinning disease, particularly in postmenopausal women. Shortly afterward, new evidence began to appear, casting doubt on the absorbability of the calcium in some supplements, and on the idea that calcium tells the whole story. Maybe magnesium or manganese is as important as calcium. Or maybe estrogen is more important than minerals.

Dairy products are a more reliable calcium source than supplements, but stand by for future developments while you’re drinking your low fat Why such apparent waffling?

For one thing, human chemistry at the cellular level is extremely complex. Moreover, science is a process, not a fixed body of conclusions. The very nature of scientific investigation may lead to seeming uncertainties. A hard, unarguable scientific “fact” in the laboratory may not be a “fact elsewhere. What happens to a rat’ fed large quantities of artificial sweeteners may not necessarily happen to a human being. But if a substance consistently harms rats, there’s room for question. Large population studies also produce “facts”: for example, the fact that the Japanese, with their low fat diet, have much lower incidence of coronary heart disease than Americans, who eat a lot of fat. Still, that doesn’t mean that every person on a high fat diet will get heart disease. It also doesn’t mean that a low fat diet is guaranteed to prevent it. The risk factors we talk so much about apply to large groups, not individuals. We have all heard stories about longtime smokers who live to be a hundred and people who never see a dentist but have perfect teeth. The question is where you want to place your bets.

In the case of the great salt dispute, whose advice should you follow? The connection between sodium and hypertension is not simple and nobody thoroughly understands it yet. Still, we know that marked salt reduction almost always lowers years some medical discovery will make hypertension as rare as smallpox. Until then, we suggest that you follow the recommendation of the American Heart Association. It won’t hurt you to cut down on salt; and it might save your life. This ought to be the essence of all health advice: if it has a good basis in science, and if it is likely to help and can’t hurt, it’s worth doing.

Article extracted from this publication >> February 12, 1988