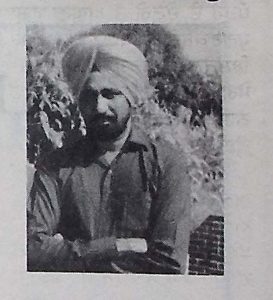 TARLOCHAN SINGH is a T young man who established himself in trucking business in a short span of six years through hard Labour and adventurous nature. After migrating from village Jagpalpur, District Kapurthala, to US.A. in 1979, he tasted and faced all odds before sitting on the steering wheel of the truck. Initially, he did! every odd job which brought him success in U.S.A. He now owns a fleet of nine trucks which run in four States of the US.A. Between Arizona and Washington. His two younger brothers Gurmel Singhk known as Geli, a kabaddi player and Manjit Singh are doing their best in expanding their business. Tarlochan is equally interested in the promotion of sports. He was the person behind the Organization of three tournaments at Freemont. This year, he is hoping to revive the Sports spirit by organizing a tournament in the Bay Area.