NEW DEHLI, India: Left arm Spinner Maninder Singh was dropped on Saturday from the Indian squad for a tournament in Sharjah in a disciplinary move, cricket board sources said.

They said the 23-yearold was left out of the 14man squad because of a clash between him and fellow bowler Manoj Prabhakar in a match in Delhi last month.

The Press Trust of India said Prabhakar hit Maninder on the shoulder for heckling him. The two men, who were playing on different sides, were fined and warned they would be banned from cricket for a year for a repeat of the incident.

A selection board spokesman, however, insisted that it was Maninder’s poor bowling form which led to his dropping,

Another left arm spinner, Ravi Shastri, has benefitted from a disciplinary move. Shastri will Captain the side in the absence of Dilip Vengsarkar, who is serving a six month ban from International Cricket for writing about matches in newspapers while playing ‘in them,

The team will leave for Sharjah on March 22, three days before the start of the tournament, which also features New Zealand and Sri Lanka. 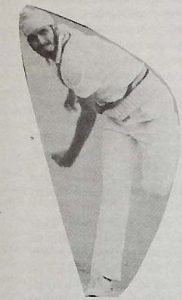