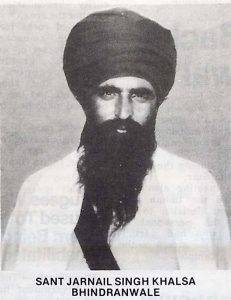 The well planned and rehearsed invasion of the Golden Temple in June 1984, the massive cordon and search operations following it, the military rule in Punjab since then, and the massacres after Mrs. Gandhi’s death constitute a sequence of tragedies planned and perpetrated by a fascist government against its own people.

The Indian government has tried to make Sant Rhindranwale scanegoat for all the damage done by its own ineptitude and wickedness. It is very important that history judge the man impartially.

Fortunately, some tape recordings of the late Sant Jarnail Singh Bhin dranwale’s lectures to the Sikh congregations at the Golden Temple are available. From these the world can judge for itsel! Whether this man of God was a separatist, a terrorist, antinational 1 just a holy man, caught in the machinations of ¢ wicked administration seeking light from the scriptures of his religion and trying to tell other: of his faith to do the same. True to his frequently expressed sentiment, he lived as a de. Voted Sikh with dignity and self-respect, and died for the faith. As stated by the Guru: “I look forward to dying. When I die, it should be at God’s door.”

Apparently, the Indira government escalated its persecution of the Sikh minority after Mrs. Gandhi’s electoral victory in 1980. She was determined to teach this vigorous re. Legions community a les. Son. Never again would they launch agitations against her corrupt and unjust government. This escalation took the form of large scale arrests, tortures and murders of Sikh young men at police stations.

Sant Jarnail Singh Bhindranwale, a devoted Sikh preacher unused to political trickery, presumed the atrocities were being committed by overzealous police officials. He appealed to various authorities including senior administration officials, ministers in the state government courts, and leaders in the central government. He did not get redress. Instead of taking any action to curb the police officials, the government started the propaganda that Sikhs were engaging in subversive activities, were demanding a separate state, were jeopardizing India’s unity, and were in every way an undesirable group bent upon mischief. When a Sikh died, there was no judicial inquiry. Even when an inquiry was held under public pressure, the guilty officials were never punished. The death of a Hindu was grounds for a proper inquiry and punishment of the offenders, but not so the murder, rape or torture of a Sikh. Insult to Sikh scriptures and Sikh gurus were not objectionable in the eyes of the government. Indeed heretical groups were actively patronized. The government deliberately set the Hindu community against the Sikhs. Whenever a Hindu died a violent death, without any evidence and without even the semblance of any proof, the government was in a hurry to announce that the killers were Sikhs. For the same offense, the Sikh could always expect punishment more severe than a Hindu. There were three aero plane hijackings as part of the Sikh peaceful protest movement. In none of these were the hijackers armed. Nor was there any damage done to the planes or injury to any passengers. In all cases, after the plane had landed, the hijackers turned themselves in without resistance, arguments, or a set of demands. Instead of following the normal legal process, the government shot one of them dead, another was given a lethal injection to cripple him for the rest of his life and several are still in exile in Pakistan. Hindus responsible for a similar hijacking, to protest Mrs. Gandhi’s detention while she was out of power, were rewarded with seats in state legislatures.

Having control of radio and television and sympathy from the predominantly Hindu press _ willing to apply the Hindu definition of sanctity to Sikh religious practices, the government was able to get the Indian public to accept the big lie. The Sikh point of view never reached the public outside of Punjab and Delhi because it could only be carried by word of mouth. Thus the most patriotic community in India which had provided the greatest sacrifices for the achievement as well as preservation of the country’s freedom and had participated most significantly in the economic growth of the region was suddenly labeled antinational and treacherous and therefore needed to be humiliated and destroyed.

The government declared the Sikh tradition of bearing arms as equivalent to preparation for an armed conflict. This was a direct assault on the Sikh religion itself. The government killed hundreds of Sikh young men by torture hoping that the Sikhs would be frightened into submission. Thousands were sent home from police interrogations as cripples. There were cases of Sikh women, relatives of the Sikh activists, being stripped and paraded in the streets and raped at police stations by police officials.

Sant Bhindranwale appealed to the Sikhs to look to their religion for solace and tor the way they should conduct themselves in life. This led to the Sikh revival under his guidance. Contrary to the steady erosion that had been going on for thirty years, thousands of Sikhs returned to the fundamental values of prayer, service and sacrifice and sought confirmation in their faith. The government treated this religious resurgence as organized revolt.

There was lawlessness in Punjab caused primarily by the government killings as well as _ incidents of desecration and violence orchestrated by it. Sant Bhindranwale and his followers and certainly the vast majority of the Sikh population had nothing to do with it and would have been thankful for an end to the senseless process. However, the government, in order to give the Sikhs a bad name and to justify the actions it was contemplating against the Sikh community, ascribed all crime in the state to Sant Bhindranwale who was a virtual prisoner in the Golden Temple complex. This led to the buildup of violent anti-Sikh sentiment all over India.

Sant Bhindranwale was a “‘saint soldier’’ in the finest tradition of the Sikh faith. In his life, he stood for truth, amity, justice, and the practice of religion. He died defending the holiest shrine of his faith, vastly outnumbered, vastly outgunned, supported by a motley group of a few (estimates vary from 50 to 250) untrained young men armed with an assortment of obsolete weapons. He knew he couldn’t win a military victory. That was not really the point. He couldn’t possibly let Mrs. Gandhi’s hordes desecrate the Akal Takhat while he lived. His martyrdom, his glorious death, will be a source of perpetual inspiration to all humanity. It will be remembered as a divine message that all is not lost for God’s people. That even though wickedness rules, there will always be some who will defy the devil and that truth will triumph. We need not mourn his death, for, according to Guru Granth Sahib, he has only ‘gone home’ to God. We indeed are sad for mankind at its loss of an outstanding teacher and guide.

Article extracted from this publication >>  April 5, 1985