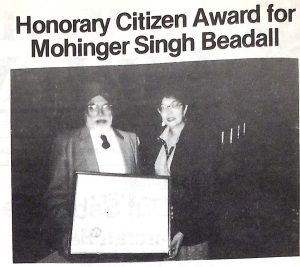 On April 11, 1985 Mahinder Singh Beadal, (Dhut) 73 year old retired businessman in Victoria, received the Honourary Citizen Award from His Workship Mayor Peter Pollen (Mayor of Victoria, B.C.) for his 50 years of volunteer community work. He is the only Sikh to ever receive this distinctive award of recognition in this city. He came to Canada from India at a young age of 18 to be with his father, Battan Singh (Dhut), who was an early pioneer of Victoria from India. Mahinder Singh became involved at a young age with the Indo-Canadian community. He was the liaison man with the immigration officers to assist fellow countrymen. Mahinder Singh started the first Punjabi School at the Sikh Temple in Victoria. 1939, Mahinder Singh and his father Battan Singh were very instrumental in assisting their fellow countrymen to become legal landed immigrants to Canada in 1939. This meant many months of staying in Ottawa at their own expenses to negotiate with immigration officials for these people’s rights. When this happened the people were then registered as legal landed immigrants and then were allowed to apply to bring their wives and families out to Canada. This was of the highest esteem for the Beadall’s to have been able to help so many Sikhs to stay in Canada and become the prominent Sikh Society that they are today. Mahinder Singh attended the first American Canadian Punjabi Conference in Stockton, California, 1949 with other Sikh delegation from Canada. This conference was a real success to deal with both countries concerns of their Sikh communities. He is the founding member of the Punjabi Akali Singh Temple, 2721 Graham S&t., Victoria, B.C. and has served for the past 35 years as president, secretary. He is still very active in the community giving assistance wherever the Sikhs need it. Along with his wife Balbir Kaur, they both spend many hours of their life at the Temple.