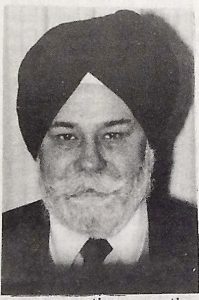 Washington__ Gen. Bhullar, Secretary General, WORLD SIKH ORGANIZATION described as dangerous Indian Prime Minister Rajiv Gandhi’s new posture that his government had no quarrel with the Sikhs but had only a minor political problem with the Akali party. It is strange that Rajiv government has only arrested members of the Akali party whereas it has mercilessly gunned down thousands of innocent Sikhs and destroyed Sikh holy shrines, said Gen. Bhullar. Sikhs massacred in Delhi were not Akalis but traditional supporters of Gandhi’s party. They were killed not because they were Akalis but because they were Sikhs, he said.

It is a shrewd move by the new Prime Minister to divide Sikhs into three distinct groupings Akalis, Extremists and Sikhs living abroad. Rajiv Gandhi has first drawn these imaginary distinctions and would soon begin to identify Sikh spokesmen as representing a particular group and finally would project Sikhs as a divided house indulging in internecine conflicts. Gen. Bhullar warned that the old game of divide and rule would not succeed anymore. Sikhs know what place they have now in India and no amount of camouflaging would deceive them. Gen. Bhullar went on to say that India’s best interest lies in facing the reality and recognizing the Sikh aspiration for the ‘‘glow of freedom’ as legitimate.

Article extracted from this publication >> February 1, 1985