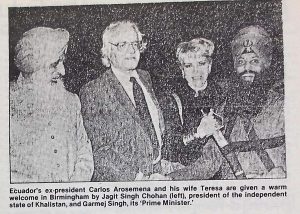 Quito — A Group of Ecuadoreans, headed by the Chairman of the ruling National Revolutionary Party visited London for talks with Sikh freedom fighters, a Foreign Ministry spokesman said yesterday. The spokesman, Abelardo Pozo, said the delegation, headed by Carlos Julio Arosemena and including the Government adviser on migration and a representative of the Sikh community in Ecuador, was unofficial.

Earlier today the Indian Foreign Ministry said it was investigating reports in the ‘Indian Express’ newspaper that the delegation told the freedom fighters last Saturday that they sympathized with the Sikh cause and that Ecuador would provide 30,000 acres of land for Sikhs to set up a government in exile.

But a diplomatic source said the Ecuadorean government was acting “with extreme caution and reserve” because it continues to maintain diplomatic relations with India.

The ‘Indian Express’ said the Ecuadoreans met on Saturday with Sikh freedom fighters campaigning for an independent nation called Khalistan. The newspaper said: “they told the gathered Khalistanis that the Ecuadoreans sympathized with the cause of the Sikhs and that they would do everything to see that their dream for the creation of a separate and independent Sikh state comes true.”

Ecuadorean diplomat in New Delhi refused to comment on the report.

Meanwhile the Second Secretary in the Ecuadorean Embassy in London said these Ecuadoreans who were reportedly holding talks with Sikhs in Britain were unofficial and absolutely a private delegation.

According to AIR report the charge d’affaires of Ecuador in New Delhi was summoned to the External Affairs Ministry yesterday and asked for clarification on his government’s position regarding the report.

Replying to questions by newsmen an official spokesman said in New Delhi that the government is verifying the fact about the report. He said there is obviously no basis for any country to take such steps which amounts to questioning the unity and territorial integrity of India.