There were over 15 Gurdawara starting from New England Sikh Study Circle Milford Mass and mid-Hudson Sikh Cultural Society Fishkill (NY) in the North to Sikhs of Washington D.C. in the South.

All through the parade New England Sangat was reciting Shabad Kirtan lead by Bhai Swaran Singh which was very much appreciated by one and all. Also presenting a very impressive scene was the Amrit Sanchar float and that of Baba Deep Singh and Sant Jamail Singh Jee Bhindranwale. Khalistan Zindabad slogans were matching the skyline of Manhattan Bhangra and Gidha floats provided their own color and vigor to the parade

The whole parade route was one impressive scene of Kesri color interspersed by black and blue turbans as well. The by-standers and passerby were impressed by the sight of Sikhs in their colorful Costumes with teens and toddlers walking with their parents

The weather presented a great challenge this time when buses rolled from New England it was snowing and by the time the parade started the weather was damp. The dampness did not dampen the morale and spirit of the Sangat and all through the parade it was dry but cloudy.

At the conclusion of the parade the Sangat was addressed by Sardat Satjiwan Singh Khalsa Dr. Amarjit Singh Bhai Satinderpal Singh Robert Abram Esquire Attorney General of the State of New York and our Kashmiri brothers particularly Sardar Satjiwan Singh Khalsa lashed at Indian Government for violation of Human Rights of Sikhs in light of 1992 report of Amnesty International. The langar arrangement was simply superb and Sikhs had a great day. There were a lot of stalls providing materials relating to Sikhism etc.

This annual event provides unique opportunity to Americans to learn about the cultural diversity of this great country represented by Sikhs and to Sikhs to display and share their rich cultural heritage with Americans in general and at large. 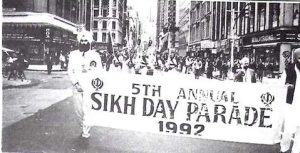 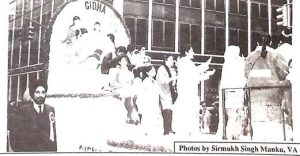 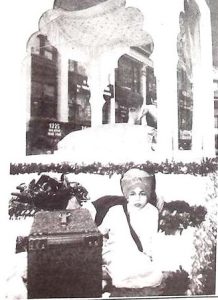