Dallas: On the occasion of Vaisakhi , the Sikh Sangat of Dallas Metro  had the opportunity to hear the views of Dr. Amarjit Spokesman Panthic Committee & executive director Khalistan Affairs Center He enlightened the Sangat in detail about the background, which lead to the demand for Khalistan and declaration of Independence from India in 1986,

He further told that at present repression have been let loose over the Sikh, Muslim and Christian minority in general and the Sikhs in particular. In the guise of democracy, fascist methods are used to suppress the legitimate aspiration for a Sikh nation, with the help of half a million military and paramilitary forces. Since independence, every state Government formed by the Sikhs through Popular votes, was dismissed by the Government of India. In the recent assembly election 90% of the population boycotted the election, showing their disbelief in the Indian constitution. He continued that the Sikhs are being deprived of their natural resources so as to weaken them economically. Also being decreased so that no identify is left for the Sikhs.

The Sikhs were also discriminated at the time of linguistic division of India,

The amnesty international has clearly indicated the government of India for its violation of human rights Dr. Singh explained that the Sikhs are peace loving people and in their declaration of Independence, they have asked the Government of India, to peacefully decide the boundary of Khalistan, During the question and answer session Dr. Singh explained that the objective of Khalistan affair center is to counter the disinformation campaign by the government of India and to till the free world about the atrocities and inhuman torture of Sikh Youths as well as the denial of very basic human rights to the Sikhs in India.

Darshan Singh Virk giving introduction of building of Gurdwara to said, that it was necessity of the time to have a common place for the Sikhs so that they an openly get together and discuss about the problems and freedom of the Sikh Nation

Later on Dr. Gurinder Singh Grewal, editor-in-chief World Sikh News addressed the Sangat and made them aware of the hardship being faced by the Sikhs in Punjab, due wo the repressive policy of the Brahmanical Government of India. He explained the importance of strengthen the Sikh media to counter the Indian Government propaganda against the Sikhs. He advise all the Sikh to supportive only popular Sikh Newspaper, World Sikh News, so as to serve the Sikh Struggle for Independence. The Sangat heard the Sikh leaders in pin drop silence and approved, what the speakers said with loud Jakaras.

The entre proceedings were covered by the Dallas morning news and Dr. Amarjit Singh gave an exclusive interview to this newspaper after, r. Amarjit Singh was honored with “Siropa” from Sangat of Gurdwara Singh Sabha, Dallas. 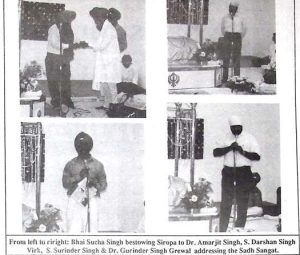 Article extracted from this publication >> May 1, 1992