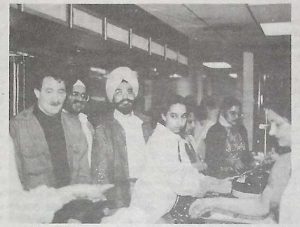 WASHINGTON: More than 1,200 hungry homeless people in the Nation’s capital received a hearty hot meal from Sikh volunteers of the Washington metropolitan area on March 18. This was the fifth time Sikhs had pitched in to help their fellow Americans.

The free dinners took place at the districts shelter run by the community for creative nonviolence. The group is headed by activist Mitch Snyder, whose efforts on behalf of the city’s hungry and homeless has been captured in a television movie starring Martin Sheen.

In 1986, Snyder went on a hunger strike and broke his fast only after President Reagan intervened and directed the federal court to provide funding for the renovation and refurnishing of the shelter.

Bhupinder Kaur Saini, who coordinated the dinner service said, “Once again we have been greatly encouraged by the cooperation and support received from all sections of the Sikh community. Along with experience, we gain more goodwill and support each time, which makes the entire effort extremely worthwhile.

Rajwant Singh secretary of Guru Gobind Singh Foundation said, “not only as Sikhs but also as American citizen it is our moral duty to help alleviate the growing problem of homeless in the United States. Moreover, it affords us an opportunity to highlight the universality of Sikhism. The principle of humanitarian service as stressed in Sikhism extends beyond itself to the entire humanity regardless of race and religion.

He said that “such humanitarian tasks would not only provide the communal with moral strength but also prove to be a great unifying force.

Narinder Singh Malik, President of G.G.S.F. said, “We were encouraged by the overwhelming support from the Sikh community. Not only in the Washington area, but also from outside as well.

”We hope this effort will provide an incentive to Sikh organizations who want to conduct similar activities in different parts of the country.”