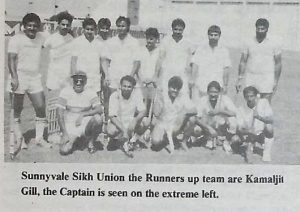 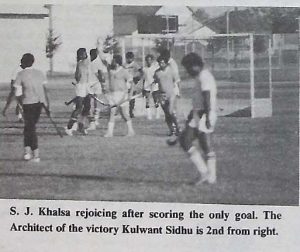 By Our Sports Correspondent

The five member Organizing committee composed of the following, “Trilochan Sandhu, Kamaljit Gill, Ravinder Pure wall, Kanwardeep Sidhu, and Bobby Sandhu, All five of them from San Jose area have done the Sikh youth in California State a Union. The first half played at a fast pace was barren though San Jose Khalsa raided the Sunnyvale goal fairly often.

In the second half the winner was netted by Kulwant Sidhu for the S.J Khalsa who won by the solitary goal. One must speak highly for excellent goal tending by Sid great service.

The tournament was played on a league basis. The final game was between the old rivals San Jose Khalsa and Sunnyvale Sikh pique for Sunnyvale Sikh Union. The teams were represented by the following Players.

Later in the evening at the Community Hall in San Jose at the well-attended function, prizes were distributed. Leading players from all the clubs were honored. 4 numbers of players from Los Angeles and Yuba City were awarded prizes for showing good display of hockey.

In his address to the gathering Mr. H.S Bhullar, manager of WSN stressed the need for traditional sports and also to keep the unity amongst the youth, He said WSN would cater to all sportspersons and the paper would act as the voice of sport everywhere,

For the individual excellence the following were awarded the trophies;

The main Organizers Kamaljit Gill and Tarlochan Sandhu told WSN that their aim is to promote Sikhism in U.S.A., especially the 10th Guru.

They also will promote field hockey in California State,

Both of them were unanimous about the future success of this tournament. In fact the S.J Khalsa the organizer is only two years old. The shortcomings, noticeable in this tournament like fewer teams, inferior umpiring and lack of good playing fields are some of the things that the Organizers are thinking of for the next tournament. Both Gill and Sandhu were very appreciative of participants for the time, money and energy spared by one and all. Eventually they are optimistic of this tournament being a success at National level,

The Chief Guest for the night Mr. Pritam Singh Sahota was another example where the Organizers selected somebody from amongst them. In fact one of his sons played for a team.

The sumptuous dinner was followed by Hawaiian dances and of course the ‘Bhangra dance was there too. Everyone danced to Punjabi music bringing down the curtain ‘on two days of festivities.