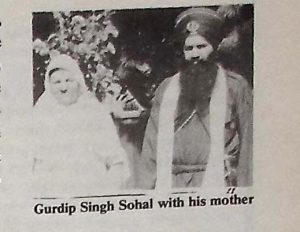 GURDIP SINGH SOHAL, A young President of the management committee of Sikh Temple Freemont, Ca., is a true representative of the younger generation who stormed into the “life and death struggle” for carving out a sovereign state of Khalistan in Punjab.

He migrated from village Sohal Jagir (Punjab) to U.S.A. in 1976. He soon became a front runner in the economic race by establishing himself as an insurance agent with a reputed firm. But his real self-became known only when he became “Amrit Dhari” in 1983 at the persuasion of Baba Jiwan Singh. Mr. Sohal soon became a leading light for the younger generation to mould them toward true Gur Sikhism and to inspire them to serve the great cause of the community. The people soon started watching a new class of young men wearing traditional Sikh clothes (symbolizing as wortiers and with flowing beards). He was an instrumental in persuading people to take Amrit on various occasions with the help of his other colleagues. Their efforts and persuasion bore fruits and resulted in producing more than a hundred “Amrit Dharis”. Mr. Sohal and other members of the management committee of Gurdwara Free mont, Ca, has done a splendid task in furthering the cause of Sikh religion.