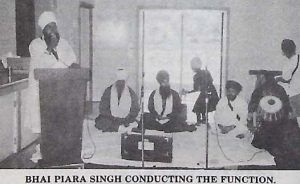 SAN JOSE, CA: Rich tributes were paid to the memory of President ZiaulHaq of Pakistan and Gen. Avtar Singh Brahma of the Khalistan Liberation Force at the Akhand Path Bhog of Sri Guru Granth Sahib held here on Sunday September 4, 1988 for the peace of their souls. The Bhog was jointly organised by the Sikh Muslim Friendship Society, World Sikh Organization, Babbar Khalsa International and Sikh Youth of California for which S. Gurdeep Singh Sohal acted as the general Coordinator.

Speakers eulogized the services of President Zia in giving political stability to his country and recounted the glorious role played by Gen. Brahma in the struggle for Sikh freedom. Mr. Harmohinder Singh Bhullar, Manager World ‘Sikh News described Gen. Zia as a friend of the freedom loving people of the world. Offering his tributes, he said that Gen Brahma laid down his life for « great cause and to realize his dream it was necessary that Sikh must put up a united fight.

Prof. MS. Sidhu, Editor Work Sikh News said that whereas Gen Zia was victim of International Terrorism, Gen. Brahma was the victim of State terrorism. “Martyrs Constitute the real wealth of a nation and nations survive because of the sacrifices of gallant and committed men like Avtar Singh Brahma,” he said. “The best tribute that we can pay to him is to contribute in whatever manner we can to strengthen the cause for which Gen. Brahma stood and died,” he added.

Dr. Gurinder Singh Grewal, President World Sikh News and Secretary Sikh Muslim Friendship Society said that President Zia’s death was a great loss to the freedom movements in that region, particularly to the Afghan Mujahedeen who are fighting the Soviet puppet government in Afghanistan. “Gen. Zia was also sympathetic to the Sikh movement for freedom,” he said. He said that sacrifices made by Gen. Labh Singh and Gen. Avtar Singh Brahma would definitely bear fruit. “They have left behind a glorious trail which would serve as a constant inspiration to us to emulate their example,” he added. He also emphasised upon the need to make a coordinated effort to achieve our objective rather than frittering away our energy and resources in isolated exercises.

Mr. Muskeen Khan of Stockton area complimented the Organisers for the Akhand Path for the peace of great martyrs. He also recounted Gen Zia’s role in regenerating Pakistan’s sick economy.

Amrik Singh Gill of Stockton said that Sikhism stood for universal brotherhood. “Sikhs pray for Sarbat da Bhalla and act as saint soldiers. They fight against injustice, oppression and in self defense only,” he said. He also appealed to the Sikhs to unite at this crucial moment in their history. A discordant note, however, was introduced by Bhajan Singh Bhinder who, without specifically naming any one, attacked those who talked of unity and charged that they were not sincere to the Sikh cause. He even dubbed them as “traitors.”

Bhai Gurdeep Singh Sohal praised Gen Zia for looking after the Sikh shrines in Pakistan in an admirable way. He also recalled his close association with Gen.Brahma with whom he had the privilege of spending eight days. “For eight days and nights we were together and I was deeply touched by his humility and unflinching commitment to the cause,” he said. In an obvious reference to the remarks of Mr. Bhinder, he appealed to the Sikhs to understand the true import of the message of the Gurus and not be misleading by those who consider themselves superior to others. “It was strange that some Amritdhari Sikhs had started criticizing the non Amritdhari Sikhs,” he said. “Why would any Sikh come to a Gurdwara or contribute to the Sikh cause if you tell him that he did not qualify to be a Sikh because he was not Amritdhari,” he asked. “Such an attitude is contrary to the teachings of the Gurus and is intended to create divisions in the community. These divisions benefit the enemy and hurt the community,” he added.

The sentiments expressed by Bhai Gurdeep Singh were repeated by Bhai Gurmel Singh who also took exception to Mr. Bhinder’s remarks, “you do not become a Sikh merely by donning 4 particular dresses. Your actions determine whether you are a Sikh or not,” he said.

S, Alla Singh narrated the story of a wicked man who was transformed by a Sant into a good person by kindling a sense of humility in him. He said correct perception of the Guru’s word was necessary to generate a climate of understanding and goodwill.

Speeches were followed by Shabad Kirtan performed by local Ragis and American Sikhs. Guru Ka Langar was served after the function.