LOS ANGELES, Ca.: World Sikh News received a massive boost at the promotional dinner organized by its supporters here on Saturday, February 20, 1988. The dinner was held in the Y.M.C.A. hall at 321 East Magnolia Blvd., Burbank, Ca. Nearly three hundred persons attended the function and the collection touched approximately $40,000. A special supplement covering, well known personalities of the Los Angeles area was also released on the occasion. The function started with Guru Gobind Singh Ji’s Shabad, “Deh Shiva Var Mohe Aehe, Shub Karman Se Kabhon Na Taron” rendered by a group from IIGS. It was followed by cultural items presented by Mr. Sohan Singh Dhola who regaled the audience with his scintillating jokes and comments, the chief attractions of the evening were Jagat Singh Jagga, Harbhajan and Satpal Singh.

Lakhbir Singh Chima formally welcomed the patrons and. appealed to the Sikhs to adopt the paper and make it a potent instrument to help fight the Dharam Yudh.

Prof. M.S. Sidhu emphasized upon the need to develop a powerful Sikh media to project the proper image of the Sikhs and to acquaint the world with lofty ideals of Sikhism,

Dr. Gurinder Singh Grewal, President World Sikh News, also called upon the people to adopt the paper as their own and help to develop it to the level of Christian Science Monitor. He said the paper would never flinch from its ordained mission of securing a sovereign homeland for the Sikhs.

Didar Singh Bains, President World Sikh Organization (International) commended the management and staff for their dedicated work. It is essential that we must have an organ to promote Sikh thought and Sikh aspirations. He said the paper must strive to promote unity among the Sikhs and help to sink differences. We cannot be complacent in our effort to establish Khalistan, he added.

Dr. Jasbir Singh Mann said the Sikhs realized in 1984 the importance of media. To get the right of self-determination for Sikhs in India. we need to work at various levels and developing a powerful media 1s absolutely necessary for us, he said. He complimented Prof. Sidhu for doing an excellent job. Particularly through his editorial comments, at his suggestion, Prof. Sidhu was given a standing ovation by the audience. He however suggested that the newspaper should refrain from criticizing the leaders. He also suggested that controversies over issues like Amritdhartes and non Amnitdharies should be discouraged

Dr. Harbans Singh Sraon said the press and the nation rise and fall together. Writing is not an easy matter, it is an art. He said. He appealed to the Sikhs to develop this art. He quoted from Guru Granth Sahib to show the uniqueness of Guru’s teachings. He suggested to the audience to give World Sikh News as a gift to their friends and relatives. Reporting must be accurate and before reporting the editor needs to see whether the report is true and fair whether it would create good will. He made suggestions for the improvement of the newspaper and asked the readers to send their input.

Dr. Shivdev Singh highlighted the importance of the media as more publications are required to cover other also the visual me facets of life he said. The news Paper can play a positive role in getting recognition for Sikhism as an independent religion and not just a sect

Jaswant Singh Dhillon congratulated the newspaper at its success especially in view of many other efforts in this direction that somehow failed to take roots. Leaders struggle only for gains and they paid no attention to developing our own media. Indian government controlled T.V. and press labeled us “terrorists” and “extremists”, he said. We had no means to counter it. The newspaper must never desist from reporting the truth. He appealed to the Sikhs to adopt right attitude and also be reasonable.

Dr. Harmohinder Singh Gogia Appreciated the role being performed by the newspaper. He said

That in 1944-45, U.S. Jews never cared to speak for a Jewish state but now they look upon Israel as their biggest asset. He suggested that a World Sikh News fund should be created to help widows and orphans back home

Dr. Mohinder Singh Grewal congratulated World Sikh News and asked everyone to help the Sikh cause by helping W.S.N.

Hira Singh suggested that editorials and articles appearing in the newspaper should be collected and published in a book form.

Narinder Singh Somal thanked the patron sand in his characteristic jovial style described his involvement with the newspaper. The function was followed by a sumptuous dinner prepared by Mrs. Chima and her friends,

Article extracted from this publication >> February 26, 1988 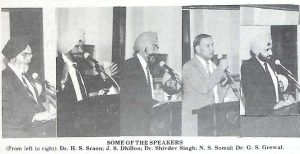 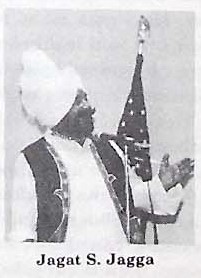