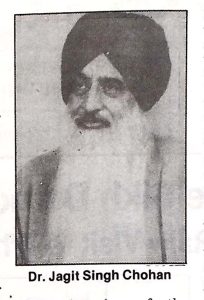 I sincerely wish I could welcome you all under happier circumstances but as much as I have shared my laughter with you in the past, permit me today to share my grief, my pain.

A year ago the forces of the Union of India invaded the Golden Temple in Amritsar. To quote a retired General of the Indian Army, “No quarter was sought nor given” in that action. Just how many people died in that operation in Punjab is now a numbers game that can be played indefinitely. The fact is that the Holiest of Holy Sikh shrines was attacked, violated and damaged. The destruction of the priceless manuscripts was an afterthought and a deliberate act of hostility against the Sikh nation. I am not alone in asserting that Operation Bluestar was avoidable and ought to have been avoided. Whatever its purpose, there appears to be no doubt that it has gone wrong. Very wrong indeed. Yet, it is an action about the possibility of which I had warned the Sikh nation almost a decade ago.

Today, I share with the Sikhs everywhere, with the Sikhs dead and alive, the pain and the humiliation of those acts of aggression. The invasion of the Golden Temple revealed to every Sikh man, woman and child the truth of what I had been saying. A point in time will come when, in spite of the Constitution, there will not be any guarantee in India either of Sikh faith or of Sikh life. Events since then, which have resulted in wanton loss of Sikh life and even death of Sikhs in custody, have proved that the Sikh fear is not baseless; there are substantial reasons for it. It would appear that the Administration in New Delhi has launched a campaign to deprive the Sikhs of their humanity a condition necessary for guilt free massacre of the Sikhs. Even the liberal element of the predominately Hindu society in India now refers to the Sikhs as the “terrorists” and advocates their “liquidation.” I am reminded of the societal conditions obtained in Nazi Germany during the 1930s. The very thought makes me afraid for the Sikhs, for the leaders of India and for peace.

Our struggle to achieve conditions in which the Sikhs could live without this kind of terror has been a long one. It has also been a peaceful struggle. I do not believe in violence of any kind and feel that denying people their legitimate rights is the worst kind of violence. I am convinced that violence will only beget violence and obscure real issues making it impossible to attempt, let alone attain, solutions. In the memory of those who died in the heat of June 1984 in Punjab, I pledge that I shall carry on my campaign until the aggression against the Sikhs is vacated and I shall do so with all peaceful means. I shall struggle to attain for the Sikhs a life of liberty which they can live without encroaching upon. The rights of anybody else. That, I believe, would be the most fitting tribute to the departed souls.

If the Prime Minister of India is also concerned about the lives and wellbeing of peoples in South Asia, which I am sure he is, he would not hesitate to recognize reality and start talks for KHALISTAN inviting to them Sikh representatives of all shades and beliefs to contribute to discussions. Should he take up the suggestion, I assure him of my cooperation.