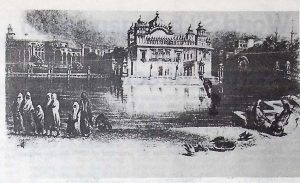 Shining in the morning light, the gilded splendor

Of its paneling’s and big dome and small minarets.

This temple is a fairy world palace

To the devotes of the Sikh faith.

Certainly, the first look brings onto the innocent eye

The image of a transcendent fact.

The ‘loving sight’ peering into heaven

From the legends of the miraculous cures

By the touch of the water in the pool of nectar,

In which the shrine stands,

The vision has been received by millions of pilgrims

Who have come here for centuries from near and far.

The actual construction had modest beginnings:

A mud-house was constructed by Guru Amar Das,

The magical herb which cured a skin ailment

Of his master Guru Angad.

To carry out the plans of his mentor

For a more permanent structure in brick.

Were the names of Amritsar in those times.

And the temple on the banks of the pool

Of nectar was surrounded

By the houses of the craftsmen from the towns

Of Patti, Kasur and Kalanur,

Who came to build the holy place.

The only market was then called

Guru-ka-bazar, still known by that name,

In praise of Amrit Sarovar.

Who came to the spiritual throne in 1581,

Felt from the growing popularity

Of the shrine as a pilgrim center the need

To have the tank paved on the four sides

And the steps of Hari Mandir bricked.

The devotees joined to construct the temple,

Which would be lived in during the everyday life?

Where the infinite mystery would be revealed

To those who may want to see.

Already, however, the demand to create

A paradise on earth became urgent,

From the vision of Guru Arjan Dev,

Of many simple hearts coming,

With dipped eyes over joined hands.

To pray and touch the holy water on their foreheads.

So this Guru had the structure of the Hari Mandir

Planned in such a way one

The ponent causeway leading to the Hari Mandir

Was then designed, with the rectangular shape

Of the circumambulatory walk ending

At the gateway, from which the path

To nine, symbolically, the noblest truth

Of Islam about One God with the faith,

In the Hindu God Hari and his many incarnations,

Is said to have been invited by Guru Arjan Dev

To lay the foundation stone of the temple

The structure of the shrine also mixed

The rectangular form of the Hindu temple

With the dome and minarets of the Muslims

Hallowed by the meditations of holy men,

The blood of martyrs defending the Sikh faith

Against imperial oppression, a refuge to the sick

And weary, the faithful held on to the center

Against many onslaughts and the rhythms

Of the universal life seemed to secure the pilgrims

In the belief that the essential self exists

In and through and behind the flow

Of the obvious states.

And as the universe of calm survived

In the midst of all the in clemencies of change,

Made the pool of nectar the spiritual capital,

While Lahore was the temporal seat

Of his newly founded kingdom.

The gilding of the embossed plate,

Above the marble skirt of the Hari Mandir,

The renewal of the Piet redure, the embellishment

Of the interior, with lovely ceilings,

Were all renovated, finished and perfected

Under the patronage of the great general,

So that men and women may brood upon

The inner splendor, after gazing at the beauty

And wonder of the outer house and body of God

The Sikhs have always retained,

In spite of the militancy they were forced to adopt

To defend their order against the enemies

Of their reformation, the injunction of Guru Nanak

That you can range from yourself to the stars

And the moral law, if you contemplate

The Nam in the quiet of your heart.

As an eclectic monument, which has grown

From the devotion of the folk,

As much as through the skill of the craftsmen

Of the guilds, the Golden Temple achieves the kind

Of romantic glory which flouts convention,

Answers to the mood of astonishment,

And compels humility before the inner sight.