Extermination of Sikh Youth Forces women to Do Men’s Work

Extermination of Sikh Youth Forces women to Do Men’s Work 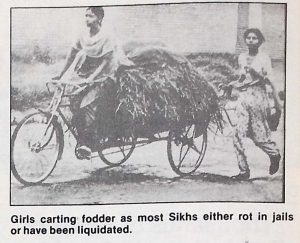 Reports have appeared from time to time in the Indian and American Newspapers that almost all Sikh young men between the ages of 1535 years in Punjab have been exterminated. They have either been killed by the police and military or arrested and jailed or have fled across the border or are in hiding.

This news is confirmed by the above picture which shows young girls with cyclecart laden with fodder for their cattle a job traditionally done by the male members of the family in rural Punjab.

One wonders, what would happen to India’s food supply if there are no young men in Punjab to carry on agriculture in a state known as the bread basket of India!

Article extracted from this publication >>  September 20, 1985

Article extracted from this publication >>