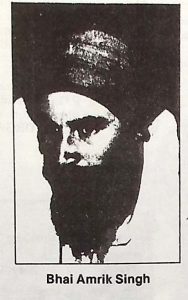 A meteor flashes across the firmament, briefly illumines the World and in the process burns itself to ashes. But leaves behind a trail of glory an example to be emulated and admired. Similarly the worth of human life is not measured in terms of the number of years that one spends on this earth, but by the contribution that one makes towards the progress, betterment and happiness of one’s fellow men.

Sikh history is aglow with a galaxy of illustrious names that soared in its skies their selfless sacrifice has transformed them into the brightest stars of the nation; the most precious jewels in the crown of national glory.

Bhai Amrik Singh’s life had the quality and character of a meteor. He too blazed across the Panthic heavens and left behind a glorious record of sacrifice. He combined in himself the spirituality of his great father, Sant Kartar Singh and the steel temper of his mentor, Sant Jarnail Singh Khalsa. The fact that Bhai Amrik Singh not only ungrudgingly endorsed the decision of his father in nominating Sant Jarnail Singh to succeed him as head of the Dam Dami Taksal, but also acknowledged his superior claim shows his cold contempt for narrow worldliness.

Bhai Amrik Singh was a young man with an incredible self-confidence. His commitment to Sikh Panth’s dignity and honor bordered on an obsession. A post graduate from Guru Nanak Dev University, Amritsar, he presented a rare combination of traditional Sikh values and modern scientific outlook. As president of All India Sikh Students Federation, he was instrumental in transforming this organization into a powerful ally of the Akali Party and played a significant role in influencing the course of Dharam Yudh Morcha.

He served as the right hand man of Sant Jarnail Singh and worked day and night in bringing the Sikh youth under the Kesari flag, particularly those studying in colleges and universities, were drifting away from the basic tenets ‘of Sikhism. It was primarily his image and his close association with Sant Jarnail Singh that arrested the drift and attracted these prodigals back to the fold of Sikh Panth.

His devotion and faith in Sant Jarnail Singh is reflected in the way he responded to the suggestion that in the event of the attack on the Golden Temple by government forces he should come out of the Temple as Sant Jarnail Singh and vowed to fight to the last in defending the sanctity of the Darbar Sahib. He categorically rejected the suggestion and with a characteristic sparkle in the eyes declared that the idea of such a cowardly escape was too base and too mean to be given even a passing attention. He also declared that in the event of Sant Ji meeting his end fighting, his own body would also be found close to his mentors earthly remains and that is how it turned out to be. He was convinced that Sant Jarnail Singh was not an ordinary mortal and regarded him as an enlightened soul who had developed a direct communion with the Lord.

Bhai Amrik Singh has immortalized himself through his supreme sacrifice. The very mention of his name will always serve to electrify and jolt the Sikh youth into a course of meaningful and constructive service for the great glory of the Sikh Panth.