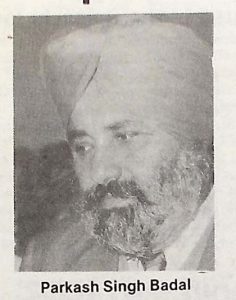 Chandigarh — Mr. Parkash Singh Badal, former chief minister and a senior Akali leader, on Sunday said the Government would have to take “fairly major and liberal steps’’ to win the Sikhs’ confidence shattered by the “Operation Bluestar”’ and the November riots.

The Akali leader, who was addressing his first press conference after release from 10month detention under the NSA, declined to specify the steps saying these would be detailed in consultation with his colleagues when the Government asked about them. He said the steps taken so far were not sufficient, adding it was in the national interest that the confidence of the Sikhs in the Government was restored. Instead of healing the wounds of the Sikhs; the Government had intensified their agony by conferring on the army personnel deployed for the ‘‘Operation Bluestar’’ “exceptionally high’ rewards normally meant for bravery against foreign invasion. The Sikhs played commendable role in the freedom movement and their history was full of sacrifices for the country, yet they had been discriminated against most lamentably, Mr. Badal said. He said the Sikhs could not tolerate desecration of the Golden Temple and the Akal Takht. The government’s action in deploying the army for invading the holy places was vindictive and against all norms and its purpose was to destroy the honor and dignity of the Sikhs. This ignominy was unsurpassed, he added.

The Akali leader alleged that the antiSikh riots after the assassination of Indira Gandhi were inflicted under a “preplanned conspiracy” by the Government and the Congress (I): The reports by various nonofficial committees on the riots had expressed this design. The inquiry instituted now was a delayed action and confined only to Delhi leaving out other states where also atrocities were committed against the Sikhs. Though Mr. Badal did not specify the steps he wanted to be taken to assuage the feelings of the Sikhs he provided a peep in his mind on the subject when he gave instances of discrimination against the Sikhs. He said it was strange that Parliament did not discuss the antiSikh riots though the House took instant notice of other violent incidents in the country. The ban on the All India Sikh Students Federation had been lifted but the arrest of its members continued, Mr. Badal said. The Government was prepared to take a lenient view of the doings of policemen in Gujarat but the same accommodation was not shown towards the army deserters who had left their posts in an emotional outburst, he added. Mr. Badal alleged that special courts were set up to try even small offenses in Punjab as if the people in the state constituted a criminal tribe. Entry of foreigners in Punjab had been banned. Mr. Badal reminded the Congress (I) government that the Janata Party had shown leniency toward Naxalites and released them. He alleged that the government was not sincere in solving the Punjab problem. A campaign of hatred against the Sikhs had been launched by the Congress (I) to win elections and they were vanished out of the mainstream. The Sikhs were not even given ticket for elections. Mr. Badal said he had told the late prime minister when talks on the Punjab problem were underway that it was the last chance to solve it. Yet nothing is done. “We joined even secret talks at the cost of our reputation to help find the solution but the efforts went to waste’’ he added. Asked if the November riots were not spontaneous outbursts, the Akali leader insisted that those were organized. When a reporter wanted to know his reaction to the assassination of Indira Gandhi, Mr. Badal said, “please do not ask such questions.’”” He however, said the Sikh history was full of instances where the Sikhs did not tolerate desecration of Harmandir Sahib. To the question if the Akal Takht could be rebuilt Mr. Badal said the Shiromani Gurdwara Prabandhak Committee and the Sikh high priests (Singh Sahibans) were the authority to decide this question which could not be settled by one person, “I will give my opinion on the subject when they (the SGPC and the high priests) ask for it.

” Asked if his party would participate in elections, the Akali leadersaid one did not know if the elections would take place. For the present, the main question before the Akali Dal was to restore the dignity of the Sikhs.

Mr. Badal said in reply to a question that he was in favor of Akali unity which was the need of the hour and also in the interest of the country. He described as a ‘‘white’’ lie the report that the detained Akali leaders were brought to one jail for consultation. The Janata Party president, Mr. Chandra Shekhar, and the Congress (S) president, Mr. Sharad Pawar, had met him at Panchmarhi. Another visitor was Mr. Subrahamaniam, senior advisor to the Punjab Governor, he said.

He warned the Government that secret migration of Sikhs to Punjab and of Hindus from Punjab to other places had started though there was no HinduSikh problem. The Akali Dal’s fight was against the Government and not against the Hindus.

When a reporter asked if he knew what had been going on in the Golden Temple complex before the Operation Bluestar, Mr. Badal said, ““Why to go back, let us talk about the present situation.”

The Akali leader told newsmen that he wanted to go to Amritsar to pay his obeisance at the Golden Temple but doctors had advised him rest for a few days in view of his weakness.