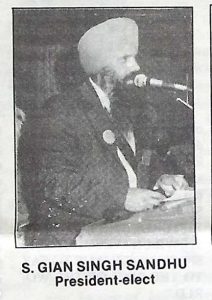 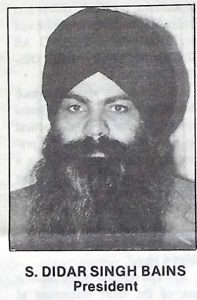 Washington D.C.:S. Didar Singh Bains (U.S.A.) and S. Gian Singh Sandhu (Canada) were elected President and President-elect respectively of World Sikh Organization (International) for the next term at the annual meeting of its General Assembly held on November 1617 at West park Hotel, Arlington, Virginia. Gen. Jaswant Singh BhuIlar was appointed for another term as Secretary General.

The General Assembly reiterated its full faith in the WSO leadership and assured total cooperation for the fulfillment of the WSO objectives. Gen. Bhullar’s role in building up the organization was unanimously appreciated and profusely applauded. He was given a standing ovation and a gold medal was presented to him in recognition of his services to the Sikh cause in general and WSO in particular.

The General Assembly also drastically cut down the powers of the President and the Secretary General through amendments in the constitution. The cut in the powers of the Secretary General was recommended by Gen. Bhullar himself as he felt that the office had too much power to be profitably used by any single individual. Both have been made answerable to the Governing Council and both shall function with the prior approval of the council. The financial control has also been vested exclusively in the Governing Council which will monitor it through a budget committee.

The General Assembly also departed from its earlier policy of supporting personalities or organizations and instead through a resolution reaffirmed “‘its full support to our brethern in Punjab who are fighting for the fulfillment of their legitimate aspirations,” and assured that, “WSO will not allow their sacrifices to go in vain.” Through another resolution it wished success “to the reconciliation committee in its efforts to work out solutions to the apartheid problem in South Africa” and also to the superpower’s summit meeting in Geneva and hoped that “the issues of arms control would be satisfactorily sorted out.”

The General Assembly also passed a resolution expressing sympathy “with the unfortunate victims of the natural calamities that took a heavy toll in the Bhopal (India) Gas leakage tragedy, famine in Ethiopia, earthquake in Mexico and Volcanic eruption in Columbia.

The meeting was held in an atmosphere of extreme cordiality and understanding. All the delegates participated in the deliberations with a sense of dedication and determination to develop mechanics for the dignity and freedom of the Sikh nation. Issues were discussed in a dispassionate and’ objective spirit and decision were made purely on reason and merit. There was not a trace of politicking that has long been the bane of Sikh politics.

The meeting started with prayers (Ardas) and was conducted by S. Gurcharan Singh Dhillon and the delegates were welcomed by S. Didar Singh who in his address said, “We have assembled here for the glory of the Panth. We now know our objectives and it is a matter of satisfaction that eminent intellectuals, professionals and religious scholars have taken upon themselves the task of working hand in hand with others to carry forward the Sikh program.” He talked of three approaches bullet, intellect and political awareness. He also outlined the need to “reach the nerve center of Western powers.”

The Secretary General, Gen. Bhullar, read out his detailed report and highlighted the difficulties in building up the infrastructure and pointed out how determined attempts were made to destroy the Organization. He elucidated that the main task of the organization can be broadly described as (1) Lobbying (2) Educating and propagating (3) Keeping communications with Western World and Sikhs in India and Abroad.

In his address S. Ganga Singh Dhillon President WSOUSA said that “never before in the entire Sikh history, the Sikhs had been as angry as they were after June 6, 1984.” The anger was mixed with pain as brutalities against the Sikhs were committed “by the army of a country that we chose as our country, by soldiers that we considered our brothers and with whom we had fought shoulder to shoulder to defend the honor and integrity of what we had willingly chosen in 1947 as our homeland.” We were angry and bewildered, he said. “It was inconceivable even during the British rule that the army would enter Darbar Sahib and destroy Akal Takht and kill thousands of innocent people. And it was even more inconceivable that the world would applaud the aggressor and condemn the victim.” It was this anger that “brought the World Sikh community together,” he argued. He also warned that “worst was yet to come,” unless we discard apathy and recognize the realities.” He complimented S. Didar Singh and Gen. Bhullar for their efforts in developing a dream, an idea into a powerful organization. He also complimented World Sikh News “for doing a wonderful job.”

He concluded with prophetic remarks, “but when I travel around the World, I see too many happy faces….. To me, that is bad news. We must revive our anger, the fear and the bewilderment that we felt in July 1984 or else we are on our way to becoming a slave community in India and a despised minority in the rest of the World.”

Reading out his report of WSO Canada S. Gian Singh Sandhu regretted that Sikh leadership was generally obsessed with either power or money. He disclosed that nearly 80% of Sikh population in Canada supports the WSO. There were 59 chapters out of which 27 were in B.C. alone. 75% Gurdwaras had become members and number of individual members was approximately 16,000. The secret of ‘WSO’ popularity was in its structure as it followed the principle of “From bottom to top” whereas other organizations practiced “from top to bottom.” He informed the delegates that all the four political parties in Canada had sympathized with Sikh predicament from the WSO platform and considered it as the most separatist organization. He also warned that Indian government was trying hard to mislead the west. They were using ambassadors to India for this purpose.

He also listed the accomplishments of WSO like having a permanent Jatha for Amrit Sanchar, arranging lectures on Sikh religion philosophy, training competent Granthis, producing a quarterly New§ report entitled ‘Sword’ besides many other publications. He also informed the delegates that Rs. 8,70,000 had been sent to Sikh refugees in India.

Dr. GS. Sidhu from Australia said that there were over 10,000 Sikhs in that country who were mainly concentrated in Sidney and Canberra. About a thousand Sikhs were running successful banana and sugarcane farms at a place called Wool Goolga. There were already two Gurdwaras and Sikhs had established a good rapport with the Australian govt. that had agreed to give temporary stay to those Sikhs who feared reprisals from the Indian government, He hoped that Sikhs in Australia would also develop a powerful wing of WSO there.

Article extracted from this publication >>  November 22, 1985