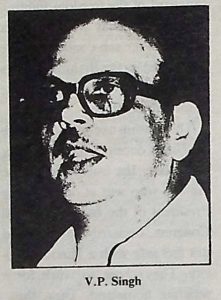 ALLAHABAD, India, June, 19, Reuter: A landslide opposition by election win in Prime Minister Rajiv Gandhi’s traditional stronghold has opened up new possibilities in Indian politics and may have thrown up a leader to challenge him.

Immediately, Singh’s campaign began drawing up plans to unite the fractious opposition, which has defeated Gandhi’s Congress (I) Party only once in 41 years of Indian independence.

Opposition leaders said the lessons from Thursday’s seven by-elections for Congress shield seats were clear: where the opposition was sufficiently united behind one candidate, it won where it was not, it lost.

Of the results declared so far, Opposition candidates won three seats and Congress one. Counting was still going on in two others and the Election Commission was studying whether to order fresh polls in a seventh after charges of vote-rigging.

Gandhi shrugged off the losses as normal midterm reversals for a ruling party but opposition leaders had no doubt that former defense minister Singh’s anticorruption campaign had found an issue on which to attack Gandhi.

He campaigned on charges that Congress officials took bribes from Swedish and West German firms which won big defense contracts. The government denied the charges.

Campaign Manager Sanjay Singh said on Sunday that V.P. Singh was working on an agenda fora meeting of opposition leaders to work out a strategy for general elections Gandhi must call by the end of 1989.

The aim of such a meeting would be to find a formula for putting up common opposition candidates, Sanjay Singh said.

The question remained, however, of whether an opposition divided by ideological and personality clashes could find a common platform that was more than simply anti-Congress.

When the opposition previously united behind common candidates as the Janata Party, it won power in 1977.

An aide said V.P. Singh would resume a motorcycle tour of the dusty northern plains around Allahabad to thank voters for his win.

“We are then thinking of riding motorcycles to Delhi to bring our anticorruption campaign in front of the man who is most responsible for the crime in India, Prime Minister Rajiv Gandhi,” Sanjay Singh said.