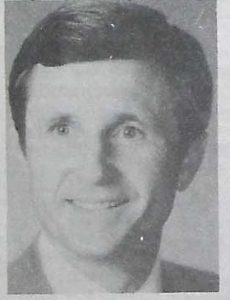 WASHINGTON: D.C: Congressman Wally Herger expressed his disappointment at Indian Ambassador P. K. Kaul’s statement that India would continue to refuse access to the international human rights organization Amnesty International, to Punjab to investigate human rights violations there. Congressman Herger was assisted by his staff and Dr. Iqbal Singh of the department of Political Science in North Carolina State University. He also heads a human rights group CHURCIL. Kaul had’ requested a meeting with Herger. They met for an hour on March 16. With Kaul was R.S. Jassal, a Sikh Indian Foreign Service official who has been specially inducted to help the Indian government’s propaganda drive against the bill HR 1067 which would suspend “most favored nation” trade status for India till Rajiv Gandhi achieves significant progress in the area of human rights and allow human rights groups to examine the situation in the region (WSN. Feb 24). Bill Chassey a Washington lobbyist was also present with Kaul and Jassal.

Dr. Iqbal Singh emphasized the seriousness of the human rights situation in the Punjab and the extreme concern of the Sikhs to the gross violations of fundamental human rights there. He referred to the reports by various international human rights organizations to support his statements and effectively countered the views expressed by the Indian delegation according to a Herger spokesman

Ambassador Kaul contradicted Rajiv Gandhi’s recent pledge to open up Punjab to foreign visitors. He told Herger that his government would continue to refuse access to Punjab for anyone connected with Amnesty International.

Evidence of human rights violations in Punjab including reports by Amnesty International, Peoples Union of Civil Liberties lead by Justice Sekri, Citizens for Democracy lead by Justice Tarkunde and the Committee For Initiative On Punjab lead by Supreme Court lawyers Ashok Aggarwal and Nitya Ramakrishnan were presented to show the atrocities of Indian authorities in the Punjab.

Herger said he was very conceed that India continues to resist the efforts of international human rights groups to gain access on Punjab. India faces the prospect of loosing its “ most favored nation “ status with the U.S as a result, Herger added.

Of particular concern Herger added was an October 1988 Amnesty International Report which cites continued instances of torture, “fake encounters” with police and detention without trial or charges.

“These are the issues which must be addressed by Prime Minister Gandhi if India is to continue to receive the economic assistance that the U.S. provides, Herger said.

The Indian government has launched a big effort to counter the bill. Senior IFS officers have been deputed here in an effort to meet congressmen to tell them that there are no human right violations in India.

Congressmen who cosponsored the bill have been under intense pressure to withdraw their support. The State Department has been towing the Indian government’s line,

Various Sikh organizations have also responded to the need to counter disinformation of the Indian government and are endeyouring to present the true picture of the repression of the Sikhs in India.

H.R. 1067 has been referred to the House Ways and Means Committee’s Subcommittee on Trade: “a responsible way of demonstrating that the United States is serious about human rights and expects other nations especially our trading partners to feel likewise,” Herger added.

During the past several years concern has mounted in the Congress about the human rights violations in India. Last year the House unanimously supported an amendment to the Foreign Aid Bill that expressed the sense of the Congress that India should take steps to ensure that the religious and civil rights of its minorities were not infringed upon.

Herger also pointed out that India’s growing relationship with the Soviet Union presents problems for many Members of the Congress. “India voted against the U.S. more often in the United Nations last year than either Soviet Union or Cuba,” Herger stated. In addition they have received around 4 billion in arms from the U.S.SR. in the past few years, and recently purchased nuclear attack submarines and Mig 29 fighter aircraft from Moscow. Mr. Gandhi’s continued reliance on’ soviet military assistance could present a roadblock to improved relations between our two nations.”

Herger hoped that Rajiv Gandhi would reconsider his decision to allow Amnesty International to visit Punjab.

Ina letter to Prof. Iqbal Singh, Herger thanked him for joining him in the meeting with the Indian Ambassador.

“I felt that our meeting was productive and worthwhile. The issue of human nights in India is certainly of extreme importance and your help in emphasizing India’s troubled record in this area ‘was appreciated, I also appreciated the information that you sent to me this week. Hopefully, our efforts will help to convince others of the seriousness of this situation.

Although the United States has been a recognized world leader in the human rights arena, India continues to fall far behind the U.S. and other democracies. Since 1984 India has imprisoned’ and detained indefinitely hundreds without giving them a trial. Many of them were reportedly held for more than two years without charge. India has released some pensioners but recently rearrested many of them. These individuals have been in prison for more than four years. I believe that it is time that they are treated fairly and either released or given a trial,””Wally Herger said.