THE IGS STORY: A Spiritual Awakening In The Sikh Youth

Home/World Sikh News Articles/1988/Feburary -19-1988/THE IGS STORY: A Spiritual Awakening In The Sikh Youth
Previous Next

THE IGS STORY: A Spiritual Awakening In The Sikh Youth 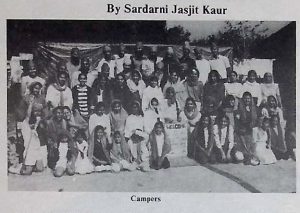 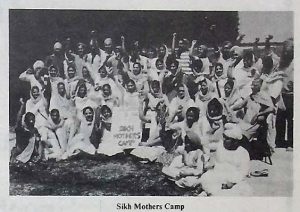 MANY many years ago when the subcontinent of India was still an undivided nation, a little boy barely eight years ‘old, was visiting the historical Sikh Gurdwaras with his parents. Traveling on a bullock cart through the countryside of Punjab, visiting Keshgarh Sahib, Bhatta Sahib, Sirhand Sahib, Chamkaur Sahib, and Anandpur Sahib, he heard stories ‘of how the valorous Sikhs faced the atrocities of the Delhi rulers. At Sirhand Sahib, he saw the wall behind which the younger Sahibzadas of the Tenth Guru were bricked alive, at Chamkaur Sahib his, imagination conjured up the clang and the thunder of the battlefield where the older Sahibzadas laid down their lives. At Anandpur Sahib, he felt the radiance of Sahib Sri Guru Gobind Singh pervade every fiber of his being, “I am a Sikh” thought this little boy. “I am the son of Guru Gobind Singh. I am brave and fearless like the Sikhs of the Guru’s times. The Gurudwara Darshan soon got over. But the love that was ignited in the heart of the little by on the land of Anandpur was going to chart out the entire course of his life.

The little boy was Kanwar Harbhajan Singh. Harbhajan could never shake off the love that had surged through his entire being which he had experienced at this tender age. As the son of an Officer in the Indian army he traveled extensively and changed schools frequently. Wherever he went, he noticed a singular absence of enthusiasm and pride in other Sikh kids with regards to their religion. As a teenm he went to Khalsa College. Amritsar. He was appalled at the state of the Sikh youth in the land of Guru Ramdas. He saw that most of them had cropped hair underneath their turbans. Their beards were trimmed. Their language was foul. And some even smoked. He heard charming Sikh girls proclaim that they would not like to marry a Sikh, Harbhajan was heartbroken. What had happened to the ideals of the Sikhs? Where had their values vanished? Where had the pride in their heritage disappeared? What had made them turn their backs to their great Gurus? How come the parents, the priests and the upholders of the religion were so impervious to the tragedy that was happening in their midst?

At the age of nineteen, when other boys of his age were either worrying about their grades or day dreaming about girls, Harbhajan formed The Young Sikh Missionaries” in Lucknow, an organization dedicated towards reviving the morale and values of the Sikh youth. He enrolled over five hundred Sikh boys. The young Sikh missionaries participated in Gurudwara Sewa, marched in Nagar Kirtans, and performed Kirtan. They tied immaculate turbans and proudly displayed their kirpans, The Missionaries motto was to honor the Guru’s word and to serve the community. The organization flourished and spread for five years. Years were rushing by and life was making demands of a different kind from Harbhajan.

Like his father, he joined the Indian army and got involved in the business of making a livelihood. Life in the army showed degeneration in the Sikhs at other levels. The “Spirit Born People” of Professor Puran Singh, had left the sctar of Naam far behind and were dowsing themselves in spirits of a different kind. They were regaling themselves with Sikh jokes and exhibiting a “modern” outlook by denouncing Sikh values. Harbhajan could not see a ray of hope anywhere. The Gurudwaras he visited in different cities where his assignments took him had become political circuses where bickering, gossip and backstabbing were rampant. The Sikh religion was on the verge of losing a whole generation and no one was taking any notice. Historians like Khushwant Singh had warned that by the turn of the century Sikhs would mingle back with Hinduism. Harbhajan would sit in his tent in the hills of Siliguri, look out into the dark, dense, starless night, watch the wick in his hurricane lantern get smaller and ponder cover the sad state of this magnificent race. Something drastic had to be done right now. He knew that the message of the Gurus was potent and powerful it could breathe life into the dead. It easy merely a matter of conveying it to his lost children before it was too late. It had to be done consistently, systematically and lovingly. It had to be done in a language they understood, in a mode to which they were receptive, a dream was born!

Harbhajan quit the army and moved to New Delhi where he took up a job in a semi government organization. His days were spent developing a security organization. His evenings and weekends planning a strategy that would put the Sikh youth back on the path of the Guru.

In June of 1972, an organization called International Institute of Gurmat Studies was born. In October of the same year, the First Sikh Youth Camp was held in an apple orchard twenty three miles from New Delhi. Two hundred and twenty five young Sikh men and women attended this camp. For sixteen years this organization has been touching the lives of the Sikh youth all over the world and transforming them from indifferent agnostics to spiritually awakened and dedicated Khalsas. It has not been an easy road but it has been a very rewarding one. A road on which Harbhajan firmly believes the Guru himself has guided them at every step. From the selection of the camp site, recruitment of participants, development of the curriculum, the raising of the funds, right down to the selection of the chef for Guru Ka Langar, their “Chief Patron”, “Satguru Sacha Patshah Aap” has watched over them.

The IGS, as the organization is popularly known as, has held twenty five Sikh Youth Camps in India, Nepal, England, Thailand, Cana da and the United States. These camps have been preceded by extensive Kirtan tours. Sikh Sangats in thousands have been inspired by young IGSites dressed in white rendering Guru Ki Bani in melodious classical Indian ragas. The Kirtan groups comprise of talented young people who spend several weeks composing the tunes of the shabads they render. The truly wonderful part is that this talent is many times first tapped in the IGS camps! As more young people learn to sing and through the Shabad strengthen their bond with the Guru, they inspire greater numbers to come and experience the indescribable joy of making the connection with Waheguru.

The Kirtan tours and the camps held in various parts of the world revealed the Sikh people torn and divided, fighting each other rather than building the community. The caste system which the Gurus had condemned was at the basis of lot of Sikh differences. “Bhapas”, and Ramgarhias, Jatsand Aroras were at loggerheads. They had built separate Gurudwaras. If the IGS group performed Kirtan at one particular place first, it was at the cost of annoying the other faction! The young people, in most of these countries had stopped coming to the Gurudwara. And then word go around that there is a new Kirtan group in town. And they are “different.” Suddenly there would be new faces in the Sangat albeit a little skeptical. After the Kirtan the IGS group would be barraged by questions and finally requests for Camp enrollment forms. And that was the first step for a whole new life for thousands of Sikh youngsters,

At the IGS camps, the participants get a firsthand experience of Sikh Rehat Maryada, the conduct and traditions of Sikh life. Apart from learning about Sikh history and the teachings of the Gurus. They learn how to conduct themselves in the presence of their living Guru, Sahib Sri Guru Granth Sahib. They learn how to do “Parkash” and “Sukh Aasan”, how to make Karah Parsad and the significance of theses and sever all other traditions. They learn the Nitnem and Kirtan. Classes are held in Punjabi and turban tying. Participants are free and discussions are held where everyone is encouraged to air their views on any aspect of the Sikh religion. Parents wonder what kind of a spell the IGS casts on their kids. What does the IGS tell them in those ten days at the camp that affects them more than anything they have told them about the Sikh religion? How come they come back and recite the Rehras rather than watch Bill Cosby or Family Ties. They cannot believe it when the next day they wake up early, shower and sit down with their “Gutkas” to read the Japji! They are truly blown away when they hear them talk of “Naam Simran” as the primary purpose of a Sikh’s life. This is not where it ends. They now want to order harmoniums and tablas from India to do Kirtan, Gee whiz! What’s this? This is simply the miracle of the Guru’s love unfolding. These kids are like the legendary bird with their beaks ‘open, thirsty and parched, waiting for that one drop of love to trans form their lives. They have been waiting a long time. They have tried to distract themselves with a million meaningless things. But their lives have been empty. IGS gives them that life sustaining drop of love and it is beautiful to see them come alive.

For the last three years, IGS has been operating from Southern California. The “IGS House” in beautiful La Habra Heights, has been the center of several camps, mini camps, and Kirtan Dewans held on the first and third Saturday of every month. The ten member team that moved to the US with Captain Kanwar Harbhajan Singh works relentlessly to keep this movement going. Their dedication constantly inspires other young Khalsas to pitch in. There is a tremendous amount of hard work and planning that goes on before. During and after the camps. They have full time jobs and take leave without pay to organize these camps. Not only are they not compensated in any monetary way for the work they perform but they also donate ten per cent of their incomes to the organization. They have come to be known as a group that is selfless, punctual and apolitical. The difference they have made is visible in the increasing numbers of turbaned teenaged boys, girls in long tresses and little boys sporting neat patkas. Last month they held a Kirtan Dewan on Sahib Guru Gobind Singh’s birthday which was attended by two thousands Sikhs. The entire program was conducted by young people that have gone through one or more IGS camps.

The IGS has already held eight camps in the US, seven in California, one in Texas. Their next camp is being held in June of this year in Detroit, Michigan. The IGS story is a tale of obstinate optimism in the face of disturbing reality. Their reward is seeing this reality change to a beautiful present and a promising future by the grace of the Guru, Negative predictions about the Sikh religion suddenly sound hollow. A wave of Chardikala is rising. The Gurus live and breathe through their people again. The future of the Sikh Panth can be nothing but glorious!

About the author: Sardarni Jasjit Kaur lives in the Bay Arca with her husband Sardar Gurjot Singh They conduct seminars and give lectures at the IGS camps. 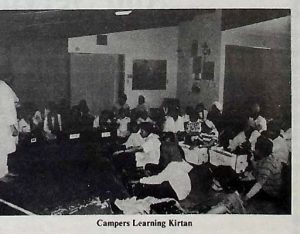