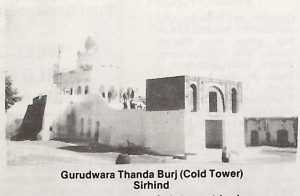 It was the month of December in 1704, a few days before Christmas. In the foothills of Punjab in the City of Anandpur (City of Bliss), Guru Gobind Singh Ji was surrounded by the enemy army. After a long discussion, it was decided that Guru Ji would leave Anandpur Fort as the Army had promised a safe passage. So on the cold and dark night of December 20, 1704, Guru Ji left the fort with his family and a handful of Sikhs. The crafty enemy threw its promise to the winds and attacked Guru Ji’s party. A battle took place. The whole party kept on fighting but maintained its movement. The Mughal army continued following very closely. Finally the caravan reached the banks of Sirsa River. On one side there was the enemy and on the other side was a flooded river. Sikhs jumped in the river. Many were drowned. Guru Ji’s whole family was separated. His wives with a few Sikhs went to one direction.

Guru Ji, along with his two older sons, Ajit Singh (17 years old) and Jujhar Singh (15 years old) with about 40 Sikhs crossed to a different direction. They hurried to a nearby place, Chamkaur, and occupied a mud house (Haveli). Soon it was surrounded by the enemy from all sides, who numbered more than ten thousand. But Guru Ji did not give up. He decided to fight. He effectively stopped all the advances of the enemy towards the main gate with arrows. Sikhs started coming out in batches of five and fought until they fell to the ground. Finally only a few Sikhs were left. Guru Ji’s eldest son, Ajit Singh, asked for permission to go to the battlefield. Guru Ji bade him goodbye, saw him sacrificing his life fighting with the enemy. Then the younger son asked for permission. He was also sent to the battlefield. In front of Guru Ji’s eyes his second son also gave up his life fighting bravely like his older brother. During the night at the command of the five beloved ones (Pyara) Guru Ji left that Haveli and the remaining Sikhs gave up their lives fighting to the last.

Guru Ji’s other two sons, Jorawar Singh (age 9 years) and Fateh Singh (age 6 years), along with Mata Gujri Ji (Guru Ji ’smother) made to a nearby village. In that village there lived a Hindu cook Ganju. He had served Guru Ji’s family for many years. He gave them shelter. But he betrayed them and during the night stole all of their belongings which included jewelry and cash. When Mata Ji asked him, he got angry and turned Mat Ji and two of Guru Ji’s sons over to the authorities at Shirhind. Nawab Wazir Khan of Sirhind kept Mata Ji and two boys in a tower which was open on all sides. They were not provided with any clothes or beds. They slept on the ground in the cold winter night with near freezing temperature. In the morning they were taken to the court. Wazir Khan asked them to embrace Islam and offered them wealth, high ranks of honor, and threatened that if they did not accept his offer they would be tortured to death. But the little princes stood firm in their faith and on the advice of another Hindu Courtier, Sucha Nand, Wazir Khan ordered them to be bricked alive. Only one courtier, Nawab of Malerkitla objected to this cruelty, but nobody paid any attention to him. A portion of the wall of the fort was pulled down. They were made to stand in that gap. Then bricks were laid tightly around their bodies. After each row of DIricKs, they wet asked again if they would give up their faith, but they persisted with the same answer of ‘no.’ Nawab got angry and ordered his soldiers to cut off their heads, which was done. When the news reached their grandma Mata Gugri, she could not tolerate this loss, and because of her old age, grief, torture and cold, expired after a few days. Slowly the news reached Guru Ji.

Thus within four to five days, Guru Ji lost his home, his four sons, his mother, thousands of his Sikhs, all the wealth. But still he was very calm. In his daily prayers he thanked God, and asked him to “‘give happiness to my family.”

Does it not sound strange that he should be asking for the happiness of his family when most of his families were already dead? Which family was he referring to? It was the family of Sikh brotherhood. That is the family he was praying for. All Sikh men and women are his sons and daughters. His four sons were only a small part of the large family. He prayed for our happiness after sacrificing his own happiness.

So, when you celebrate Christmas, remember these great traditions of your faith. Remember those two young princes who spent the cold December night in the tower with their grandmother. They gave up their lives for our sake. They stood firm in their faith. Devils could not scare them. No temptation could draw them away from their faith. The nation whose children are so brave shall prevail forever.

“Cold Tower,’’ Fateh garh Sahib (Sirhind); this was the place where Guru Ji’s mother, two younger sons were kept prisoner before their execution.