SPORTS By Raj Singh Punjab Police Know How To Kick

SPORTS By Raj Singh Punjab Police Know How To Kick 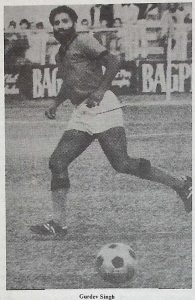 By A Special Correspondent In Chandigarh

FOR more than four decades now, the Punjab Police has been in the forefront in various sports arenas ‘of the country. In the early 1950s they had an all-conquering hockey outfit. Their ranks were studded with illustrious stars like Balbir Singh, Udham Singh, Raghubir Lal, Trilochan and Dharam Singh. There was hardly any defense in the country that could stand the onslaughts of the police forwards. Even as stubborn a goalkeeper as Desamuthu could not keep his goal intact against the set of crafty police forwards.

Prithipal Singh and Surjit Singh in later years fortified their ranks besides converting a stream of penalty corners. In other arenas players like Balwant Singh (Ballu) and Nripjit Singh distinguished themselves. All these players kept writing one bright chapter after the other in the glorious history of the Punjab Police sports. Hockey surely continued to steal the march over others.

Only a shade less distinguished was the performances of the football teams. It was to their credit that they built up from the scratch to become a force to reckon with. In the early years the police players were at times derided for lack of skill. They used to kick hard and chase the ball harder but they, were never found wanting in the matter of speed and stamina. Admirably they overcame the drawbacks and earned a name that instilled fear in the hearts of even Bengal stalwarts. So much so that the clashes between the Punjab and Bengal teams began to be treated as the main features of a football competition.

The signs of maturity were in full view in 1963 when the Punjab Police entered the final of the D.C.M. tournament. Their hopes of lifting the trophy were however dashed by E.M.E. Centre.

‘Two years later Punjab Police qualified for the final of the Durand Cup. For the second time they had to be content with the runners up prize, Mohun Bagan having prevailed upon them.

‘A year later the Police team appeared in the Capital a far more spirited, fighting and energetic side and in an all Jullundur final with Leader Club, tasted their maiden success. Goalkeeper Charanjit Singh had led the team.

But with more foreign participation the contests became stiff and challenging and the third entry into the D.C.M. final was made only in 1974, East Bengal proved a cut above them.

Punjab Police qualified for the final of the 1979 Durand Cup but had to bow before the mighty of Mohun Bagan. Gurdev Singh was there in the team after having been decorated with the Arjuna Award. He was chosen the Out-standing player in the country in the 1978 season.

In fact, Gurdey Singh had made his mark long before that, He was a source of strength, a tough customer to deal with in the defense. He had several courageous Dees to his credit. For 10 years he was an automatic choice in the national team.

Gurdey represented the country in the 1970 Asia Cup in Bangkok. Next year he was in the team for Indonesia and in 1972 in the team for the pre Olympics in Rangoon. He played in the Merdeka tournament at Kuala Lumpur in 1973 and then in the Teheran Asian Games. An injury kept him out of the 1975 season. But he was back in the national team which took part in the Afghan Independence celebrations in 1976. For the President’s Cup at Seoul he was the vice-Captain of the team. He led India in the 10th King’s Cup at Bangkok where the team claimed the third place. He was again the captain when the team finished runners up to Iran in the 1978 ‘AgaKhan Gold Cup.

Along with Manjit Singh, another outstanding footballer of the State, Gurdev had a season with East Bengal in Calcutta in 1979. But some unfavorable incidents and controversy made him return to the police fold.

Past his prime now and more than 16 years in competitive soccer, Gurdev still dons the police colour besides minding the team. In the recent I.F.A. Shield in Calcutta, he led Punjab Police to the final. This was the only ‘occasion that a team from northern India had found a berth in the I.F.A final. New Delhi Heroes had some creditable display to their credit in the I.F.A. Shield in the 1950s but they too could not go beyond the semifinal round.

It is not easy to score over Mohun Bagan or East Bengal in their home. Punjab Police could not tame Mohun Bagan but in the semifinals they had overpowered East Bengal in tie breaker, still reaching the final was a feat the Police team could boast of and a reminder of the growing strength of the teams from the North.

Darshan Singh Goga, who had served Punjab Police with distinction for nine years as a nippy goal getter, and who now is looking after the P.S.E.B. team, lauded the transformation of soccer in Punjab but lamented that not enough talent is coming up from the junior ranks to keep the flag flying.

Article extracted from this publication >> January 29, 1988