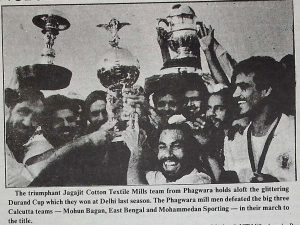 By Special Correspondent In Chandigarh

No team in recent years has made more impact on the national soccer scene than Jagajit Cotton and Textile Mills (Phagwara). In less than two decades the club has come to be ranked among the top notches in the country. The exploits of the Phagwara team are extolled from Kashmir to Kanyakuman.

Once so sure of victories over their rivals, even the big Calcutta clubs can no longer boast of this authority now while facing JCT Mills.

The club players have played a key role in making Punjab a force to reckon with in Indian football.

Victories over Mohammedan Sporting, East Bengal and Mohun Bagan in three successive outings leading to the triumph in the Durand Cup four months ago were indeed the crowning effort. The Delhi Sports Journalists Association has recognized) this achievement by choosing JCT Mills as Northern India’s foremost outfit of the 1987.

JCT Mills have invariably remained studded with a set of fighting players. More than the star status, team work and spirited efforts have been the factors behind the success of the team. You can find an air of confidence in them. They demonstrate full faith in their own capabilities.

JCT Mills team was formed shortly after Punjab had recorded their maiden triumph in the National Football Championship at Jullundur in 1970. Acting on behalf of the Thapars, the preliminary task of grouping together good players for mthe State was handled by Mr. Gurcharan Singh Virk who has continued to shoulder that responsibility till today.

Mr. Virk is happy with the achievements of the team and the remarkable performances the players have been giving. Soft spoken, he is strict in dealing with the players. He had a personal achievement too when he was chosen the best coach of the last Durand Cup tournament,

As the teambuilding activity started, Mr. Virk laid his hand on Inder Singh who was then playing for Leader Club led by Inder, Leader Club was going great guns, having qualified for the finals of both the Durand Cup and the DCM Trophy in 1971. All the spotlight of the Leader Club now started turning on JCT Mills with Inder there. With about 10 years in competitive arena behind him, Inder was now a matured player. Overcoming occasional knee troubles, he retained his sparkling form for another 10 years. Amarjit Bhatia, Gurcharan Parmar, Sukhvinder, Kasbmira and Parminder made the team live, kicking and flourishing. Deepak, Satish, Paramjitand several others kept adding to the strength of the side in subsequent years.

Within no time of their formation JCT Mills started making an impact. They earned a place in the final of the Durand Cup in 1974, finishing runners up to Mohun Bagan in an entertaining tussle. The same year Punjab had recorded their second Santosh Trophy triumph and the venue was the same Guru Gobind Singh Stadium Jullundur. Here Inder Singh had fired home 23 goals and two hat tricks a feat which remains untouched till today. Of course Darbara Singh scored two hat tricks at Quilon last month but his total tally of goals was just nine.

JCT Mills again entered the final of the Durand Cup in 1975 but finished runners up to BSF. The two teams from Punjab again crossed swords in the final next year, waging two scoreless battles before being declared joint winners.

The Delhi’s Ambedkar Stadium became a happy hunting ground for JCT Mills. For the fourth year in a row they earned a berth in the final, but Mohun Bagan frustrated them. The same year the mill team had qualified for the DCM Tournament final also, but Spartak United from the Soviet Union proved too formidable for them.

JCT Mills made a mark at Bombay by reaching the final of the Rovers Cup in 1979, going down to Dempo Sports Club by two goals.

JCT Mills, BSF and Punjab Police were almost of the same standard but the security men were a bit of a hoodoo for the Phagwara team and in the 1987 Durand Cup BSF emerged a winner.

Twice beaten in the finals by Mohun Bagan, JCT Mills had their revenge and proved lucky the third time in the 1983 final JCT Mills’ quest for the Rovers Cup remained unfulfilled as they went down to Mohammedan Sporting in 1984. The DCM Trophy too eluded the Phagwara team last year as they lost to the Small and Medium Industries Bank team from South Korea.

Last season, however, was like a fairy tale for JCT Mills. They beat Mohammedan Sporting in the quarterfinals, got the better of East Bengal in the semifinals and then overpowered Mohun Bagan in the final enriched each JCT Mills player by Rs. 15,000.

Starting almost together and growing together over the years and still serving the side well, JCT Mills will now have to simultaneously prepare a fresh lot to keep the club flag flying in the prize money tournament had _years to come.