Sikhs Feed The Hungry And Homeless In Washington ASHINGTON

Sikhs Feed The Hungry And Homeless In Washington ASHINGTON 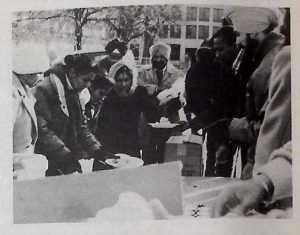 Washington ASHINGTON, D.C.:On November 21, Guru Gobind Singh Foundation here, on behalf of the Sikh community ‘of the Washington Metropolitan area, for the third time served hot meals to more than 600 of the city’s hungry and homeless.

As temperatures dropped to 20 degrees and cold winds swept through the streets, Sikh volunteers distributed basmati rice, beans, mixed vegetables, and coke to homeless people outside a shelter run by the Center for Creative Nonviolence, in downtown Washington.

Dr. Surjit Kaur, Secretary of Guru Gobind Singh Foundation (GGSF), said that one of the fundamental beliefs of Sikhism consisted in sharing one’s blessings (Wand Chakho) and in the universal brotherhood in mankind. This activity of our organization is merely an un implementation of our basic beliefs and is in keeping with the organization’s objective to make this a regular feature of its multifarious activities.

Rajwant Singh, assistant secretary of G.G.S.F, said that not only as Sikhs but also as American citizens, it is our moral duty to help eradicate the growing problem of homeless in the United States. He, added that such efforts would definitely become a source of deep spiritual and moral strength for the Sikh community.

Bhupinder Kaur Saini, Public Relation Coordinator of the foundation said, “Once again it was very encouraging to get cooperation and support received from all sections of the Sikh community from within and without the Washington Metro area.

Besides being active in providing such humanitarian service, G.G:S.F. has been representing the Sikh community in different social aspects in Washington area. Last September members of G.G.S.F. participated in an interfaith meeting and prayer services for Aids victims.

Article extracted from this publication >> January 8, 1988