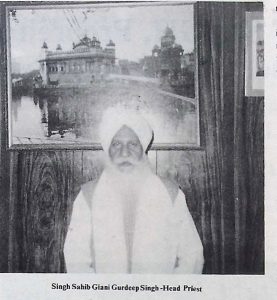 First Sikh congregational activity took place in the city of New York during 1954 when a handful of Sikhs celebrated Guru Nanak Dev Ji’s Birthday. However, regular meetings started only during 1963 when Sikhs, no more than about 10 families, started meeting every month in private houses for Satsang. As the strength grew to about 20 families, a society was registered in the name of Sikh Cultural Society in 1965. Congregations then started every Sunday at the homes of Sikhs. Further development work was pioneered by the late S. Sajjan, S. Sarna, S. Dhanwant Singh, Dr. Harbans Singh, the late Dr. Harbans Singh, S. Kirat Singh Sethi, and Prof. Gurcharan Singh. The Society was incorporated as a nonprofit, tax exempt organization in November, 1968. As the strength grew further, Sunday congregations were arranged in rented halls and at St. Michael’s School in Flushing. By April, 1972, enough funds were raised by the dedicated members and the Society bought, under the guidance of Dr. Harbans Singh, a beautiful and spacious building (an old Methodist Church) for Gurdwara in Richmond Hill, Queens for a cash payment of $65,000. Out of the funds raised, major contributions came from Mr. Sham Sani of Florida who contributed $25,000 at that time and $33,000 later and from S. Sajjan Singh Sarna who contributed $16,500 and also helped in raising the rest of the funds. This set the nucleus for growth and development for the Society which now serves the spiritual, social and cultural needs of nearly 700 families in the metropolitan area and on Long Island. About 500 Sikhs meet in holy congregation in the Gurdwara every Sunday and on Gurpurbs, nearly 7,000 devotees visit the Gurdwara to pay homage to the Guru.

The Society had the privilege of having Raja Mrigendra Singh of Patiala, a scholar in Sikh scriptures and theology as the first Head Granthi of the Gurdwara in May, 1974; He has succeeded by Gurmat Vidwan Singh Sahib Bhai Sahib Giani Gurdip Singh in May, 1976. Giani Ji, a devoted Sikh scholar and a missionary of repute had earlier served as Head Granthi of Gurdwara Sis Ganj, Delhi; Singh Sabha in Kenya and Singh Sabha in South all, U.K. He is assisted by his son S. Nachattar Singh. Giani Ji and Nachattar Singh reside in the Gurdwara premises where special apartments have been built for their residence.

Regular morning and evening services are held every day. Langar is served after Friday evening and Sunday Diwans. Arrangements have been made for the stay of visitors and Ragee Jathas in the Gurdwara premises. Children are taught Punjabi language, Kirtan, Sikh history, Punjabi folk music and dance in the Sunday school. This education is further supplemented by showing Punjabi religious movies once a month in the side hall of the Gurdwara. A library of nearly 2,000 books is maintained in the bulding and is open to members every Sunday. Ragee Jathas of repute are sponsored by the Society every year to make the kirtan programs on the stage. The Society is planning to revive its magazine “Sikh Review” in the near future. Vaisakhi celebrations are accompanied by “Vaisakhi Nite” a program of Punjabi folk songs, dance and music. Amrit Parchar is conducted every year during the Vaisakhi celebrations. Rooms for a free clinic for members of the Society and local community are under construction and will start functioning before the end of the year 1981.

The Society has been assisting other new Sikh societies coming up on the East Coast both financially and by providing other religious services. In trying to foster stronger ties between all Sikh Societies throughout the United States and Canada and creating Panthic unity, the Society initiated and hosted the first two Sikh conventions in New York which resulted in the formation of Sikh Council of North America. Already a center of Sikh faith on the East Coast, the Society aspires to spread the message of the Guru in the Western world and serve the spiritual needs of the Sikhs who are now an international community.

The real image of the Sikh Cultural Society came to light after the Ghalu Gharas of June and November, 1984. The Society under the able leadership of S. Jagjit Singh Mangat (President, Rabinder Singh Bhambra (Vice President), Baldev Singh (General Secretary) and Manjit Singh Shukla (Treasurer) has provided a true Panthic leadership to the Sikh community at the time when it was most needed. The Board of Trustees headed by S. Amarjit Singh Grewal is providing necessary guidance to the Society.

The Society provided a platform to the Sikh community to register their protest and anguish against the brutal attack of the Indian army on the Golden Temple, Amritsar; massacre of Sikhs in Delhi and other parts of India after the assassination of Indira Gandhi, violation of human rights in Punjab, killing of Sikhs in fake encounters and imprisonment of thousands of Sikhs, without legal trial in the court of law.

The Society provided legal financial and moral aid to all the Sikhs who had to face trials in the U.S for one reason or the other. The famous legal cases are of Dr. Gurpartap Singh Birk and his colleagues, Ranjit Singh Gill and S. Sukhminder Singh Sandhu were fought by the Sikh Cultural Society. The Society always took leading part in the every demonstration against the Indian government to register their protest.

In fact, the Sikh Cultural Society, New York is considered the nucleus organization to fight against the repression of Indian Government against the Sikhs in India.

Article extracted from this publication >> April 22, 1988