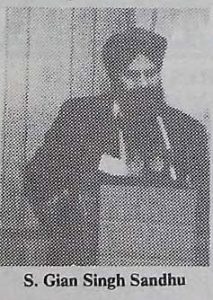 OTTAWA, Ontario, Can.: The General Assembly of the World Sikh Organization during its biannual session held at Chicago on June 18.and 19, 1988, unanimously elected the following international executive for the ensuing two year term:

The services of S. Didar Singh Bains as the first President of the World Sikh Organization International since its inception in 1984 were appreciated. He was presented with a Siropa by both WSO International and the Sikh Sangat of Chicago. He has also very kindly agreed to continue on the Governing Council in an exofficio capacity as the Past President. Sincere thanks were also expressed for the efforts of the previous executive of WSO International. The following resolutions were passed unanimously during the Chicago meeting of June 18 and 19, 1988.

3, The Air India resolution passed during the February 20 and 21, 1988, meeting in Winnipeg, was confirmed by the General Assembly.

Whereas the cause of the crash for flight Al 182 is unknown to this date.

Whereas speculative theories and the Indian government blame the Sikhs for downing that flight and for the loss of innocent lives.

Whereas the Canadian Government has supposedly spent $60 million to solve the mystery of flight AI 182.

Whereas Canadian Sikhs want to see justice done and their name cleared from predetermined accusations,

Therefore be it resolved that: WSO demands that the federal government appoint a Royal Commission on flight AI 182 and on the activities of Indian consulates and their agents on Canadian soil.