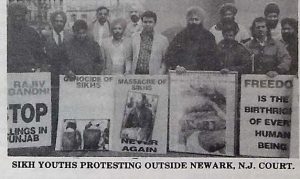 JULLUNDUR, Punjab, India Activists of All India Sikh Student Federation observed complete strike in men’s and women’s Lyalpur Khalsa Colleges, blocked traffic on the GT road, high jacked buses, deflated tires and broke a few window panes in protest against the possible extradition of the two accused in the murder case of and blocked traffic for more than one hour, high jacked three buses into college premises and deflated tires of two others, window panes of the two other buses were also broken. The trouble took a turn for the worst when security forces took into custody a student, Jasbir Singh, enraged students then high jacked another bus and a truck and General A.S. Vaidya and Congress (1) leader Lalit Maken. The two, Sukhminder Singh Sandhu and Ranjit Singh Gill, are thought to be extradited to India from U.S.A. Students from both men and women’s Guru Nanak National College at Nakodar and Sikh National College at Banga also observed a strike to register a similar protest according to the police reports. The report says students of the two local colleges went on strike shortly after 11 a.m., on February 10, drove to the offices of the Deputy Commissioner to secure his release. Girl students participated in the protest, finding both Deputy Commission and S. S.P. away to the Guru Gobind Singh Stadium to finalize the arrangements of the third National Championships, students returned and again blocked traffic for about 15 minutes. Later in the day students dispersed when. Jasbir Singh was released by the police following the intervention of the Principal’ of the Lyalpur Khalsa College, the report said