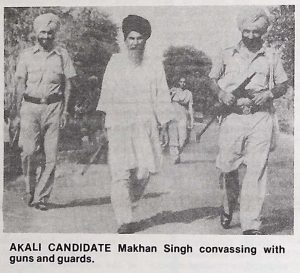 From Our Special Correspondent

Chandigarh, India — The Punjab Government is making elaborate security arrangements to ensure peaceful elections in Punjab. According to a State government spokesman 85,000 central security personnel have been deployed to maintain law and order. According to state govern. Ment sources about 50,000 Home Guards have been called in the state to assist’ in the election arrangement. The government has issued orders to make tentative arrests in the state. About 800 people have been arrested from various parts of the state. Most of them belong to All India Sikh Students Federation and Baba Joginder Singh Akali Dal. All those members of Sikh Students Federation who were released last month have been detained again. The government has also decided to impose curfew in the border villages of Punjab. In the Districts of Gurdaspur, Amritsar and Ferozepur a dusk to dawn curfew has been imposed in the border villages. This has been done to check the infiltration from Pakistan. The curfew will remain in force till Sept. 26 or the date of polling in Punjab. The district magistrates have also banned the plying of motor vehicles after 11 p.m. during the night. In the border districts of Punjab all the shopkeepers have been ordered to close their shops at 6:30 p.m.