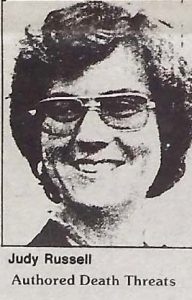 NEWYARK, N.J: Persecutor Judy Russell got herself admitted in a private hospital shortly after the United States Attorney, Samuel A. Alito, New Jersey asked judge here for a fresh hearing of the extradition proceedings against Ranjit Singh Gill and Sukhminder Singh Sandhu, saying that the prosecutor, Judy Russell, herself “appeared to have fabricated death threats against herself”,

Mr. Alito would not say what had led investigators to make the comparison between the typed envelopes containing the threats and Miss Russell’s job application. The threats were in the form of words cut out of magazines pasted on index cards.

And “No more warning, Federal court death for you” were two threats that Miss Russell was said to have sent to her. Mr. Alito said she also appeared to have sent a similar note to Judge Hedges that said, “India Government evil, U.S. Government phony, judge isn’t fair, do not send them back”.

Miss Russell had cited the death threats earlier this year in requesting Federal protection for her as well as added security measures at the extradition hearings, although she did not specifically accuse the two Indians of having sent the notes.

Ronald L. Kuby, a lawyer for the two men, said yesterday that the apparent fabrications had “poisoned the entire atmosphere of the proceeding” and that the threats probably influenced the judge’s decision in favor of extraditing the Indians,

At the hearing, Mr. Kuby said the revelatings were “the most astounding thing I have ever seen in a courtroom,” and Judge Hedges replied, “Well, I share your feelings on that”. But the judge did not say whether the threats had had any bearing on his ruling.

Mr. Kuby, who is affiliated with Willion M. Kunstler, the defense lawyer, said he would file a motion to drop all extradition proceedings against the men, Sukhminder Singh Sandhu and Ranjit Singh Gill, on the basis of “outrageous Governmental misconduct”. When he was apprehended by Federal agents at a gasoline station in New Jersey last May, Mr. Singh was described by the Indian embassy in Washington as one of the most wanted ment in India.

No criminal charges have been filed against Miss Russell so far, but Mr. Alito’s chief deputy, Michael Chertoff, said evidence of her actions had been turned over to the Justice Department for further investigation. Mr. Chertoff said he would not speculate on how long any new round of hearing might last, but said. “Whatever schedules the judge sets, we will comply”

Meanwhile, Sikhs in North America are demanding a thorough probe into this sordid drama and strongly feel that the role of big money in making the prosecutor jeopardies her brilliant career cannot be ruled out. Many Sikh organizations and Gurdwara managements have sent telegrams to President Reagan and Secretary of State. George Shultz demanding “through probe into Judy Russell’s, threatening letters” and asking the US. Government to “stop India from exporting State terrorism”.

Indian involvement in the conspiracy to send threatening letters to the judge is taken for granted. For this purpose, Sikh feel, deposits in Swiss banks or elsewhere need to be probed.

Article extracted from this publication >> April 1, 1988