Polish P.M. Visit to India Not to be Affected

Home/World Sikh News Articles/1985/February-8-1985/Polish P.M. Visit to India Not to be Affected
Previous Next

Polish P.M. Visit to India Not to be Affected 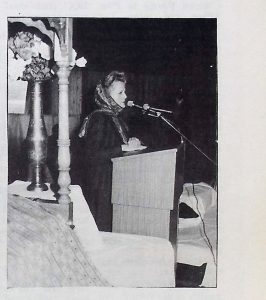 Jaruzelski is due to arrive in New Delhi Feb. 11 for a five-day state visit. Foreign Ministry spokesman Salman Haidar said the visit would not be changed despite confessions by an Indian businessman that Polish and East German diplomats were involved in a spy ring that penetrated India’s highest offices. MRS. MARY McDonald, Commissioner Cook County, Illinois, discussing Sikh issues with members of Sikh Religious Society of Chicago. A Gurdwaras at Palatine, Illinois. Photographs of Atrocities against Sikhs and cuttings from newspapers were shown to her. She expressed sympathy for the Sikh victims in India.

Article extracted from this publication >> February 8, 1985