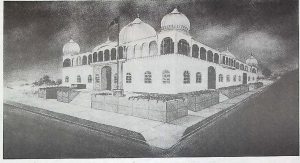 Destruction of the Akal Takhat and desecration of the Golden Temple (operation Blue Star coded by Indian Army) on June 6,1984 is considered the blackest day in Indian history A shock wave spread in the Sikh community, when the media announced attack on their sactau sactorum and forty other historical gurdwaras, resulting in the massacre of thousands of innocent pilgrims. The Indian ruling party led by Indra Gandhi caused ultimate insult to Sikh psyche by mounting on unexpected and unprecedented attack on the holiest place of worship. The Indian Government chose the means which brought deepest hurt to the Sikhs all over the world. This brutal and evil plan was a deliberate action to humiliate the Sikh Nation and annihilate the Sikh religion.

The spontaneous eruption of Sikh feelings led to demonstrations in almost all major cities of free world. Conscientious people were heard saying, “How dared she (Indira Gandhi) desecrate the holy Golden Temple. She will meet the same fate as other foreign rulers tried similar attack.” “

The Indian Government which controlled the news media’ was busy in accusing and blaming Sikhs. Ultimately truth prevailed. As soon as independent Western media found out the facts, they started putting Gandhi’s Government to shame. Mr. Mark Pinsky studied the Sikh cause in detail and wrote an article entitled * Faithful to Roots & Rites’, “despite what reports from India may suggest they are (Sikhs) peaceful, hard-working and law abiding citizens.” The Sikhs say in their daily prayer “Sarbat do bhala” meaning wishing well for entire humanity. By virtue of their religious golden rule “Kira Karia” dignity of work, they have prospered where ever they went. They are very caring people and serve humanity at every opportunity they find. They have succeeded by the sweat of their brow and owe no favors to Indian Government and are major contributors of food, foreign exchange and military force.

Mr Pinsky interviewed cross section of the Sikh community and reported the feelings of Sikhs as follows:

“I feel helpless. You feel worried about your family. I feel like I want to cry,” said Sardarni Gurinder Kaur. After experiencing denial of Visa request to Sikh Spiritual homeland, Sardar Jetinder Singh said, “I had been trying to go to India for the last year. How can I call India home”. “They have created a country with in a country”, said Sardarni Surinder Kawr. (The U.S. Sikhs need two Visas to go, one for India and another one for their Sikh homeland). “l am more hurt that the Sikhs’ image has been destroyed by calling us ‘terrorist’. We are burned that India has done so much to change our image said Sardar Parvinder Singh.

“By its derogatory internal propaganda and by controlling overseas news distribution, the Government (Indian) made the Sikh community of India as a whole notorious as terrorists and lawless people. It also distinguished some as moderates and other as extremists. This is shamefully dishonest and complete e distortion of facts”, wrote Sardar Pritam Singh. He continued, “The Sikhs are peace loving people, devoted to their families, their occupations. They practice their religion, without casting as person on or interfering with their neighbor religious practices. The Sikhs as such are looked upon not as fellow Indian citizens but as. Enemies and aliens. The aura of trust has totally disappeared. Therefore, it would be logical that two people find it intolerable and totally incompatible to live to get her anymore and if all efforts at reconciliation have been exhausted there can be no harm in parting.” Those are some of the common feelings of Sikh masses. Mr Warren Ester line of Irvine World News wrote an article entitled ‘Religious Freedom Draws

Sikhs to US’. He quoted Sardar Harbans Singh saying, “There is no justice for the Sikhs in India. There are those in the Government (like Bhajan Lal) who say “Do not arrest Sikh, shoot them’, we are going through a genocide in India such as Hitler did in 1940’s. WE want to be free to practice the principles of our religion. The Sikhs respect all religions, we believe in sharing and caring, we believe in one God and we believe in the worth and dignity of work.”

Mr.Alan Bock of Orange County Registrar wrote an article ‘Decimation of Sikhs in Punjab’. He quoted Amnesty International stating that media in India is state owned, and complete blackout of foreign press keeps the world from knowing the facts of daily terror of the Sikhs in their own country. “The Sikhs in Orange County to whom I have spoken liken the Indian Government’s campaign to genocide or a holocaust against Sikhs.” Referring to a report from Citizens for Democracy Mr Bock wrote, “ the slaughter at the Golden Temple —a pattern of repression in Punjab, that is truly frightening in its systematic brutality He continued, “ After massacre, so called black laws were passed, giving the army and central Government powers of preventive detention, sub vertices rule of law encouraging harassment and oppression.—Literally thousands of Punjabi Sikhs are unaccounted for ~ It seems clear that the Government (Indian) has deliberately stirred up HinduSikh hostilities to provide pretext for further repression.”

There are numerous reports. Which truly depict the truth and feelings of the Sikhs?

After the brutal eruption of this holocaust, there seems to be a Jolting effect on Sikh minds, which woke them up after a long slumber. The Sikhs who had deviated from basic Sikh principles, started learning their true essence. Most of the devoted and conscientious Sikhs started their Sikh attire, Gurbani recitation and understanding of Sikh history. It had a revitalizing effect on Sikh masses. They started teaching Gurmukhi and Punjabi to their children. The Amrit (the Sikh baptism) became popular. They stopped using intoxicants in large numbers.

After realizing the purity of the Sikh religion, they stopped worshiping superstitious dogmatic ways of ancient Indian cultures. They would worship only Guru Granth Sahib and one God. There is lot of enlightenment of true Sikh religion during the past three years. Hundreds of articles appeared on Sikhism in prestigious magazines and newspapers, the world has started to realize that Sikhism is a distinct religion and the Sikhs are good, noble and helpful people.

There seems be closeness among dedicated Sikhs. Numbers of organizations have been formed at the regional and worldwide basis. This brought the Sikh community together. Most importantly, the intelligent Sikhs have fully realized that they need home where they can worship freely and become an economic and political entity this is the ‘Charhdi Kala’ (Dynamic optimism) side of the Sikh psyche. 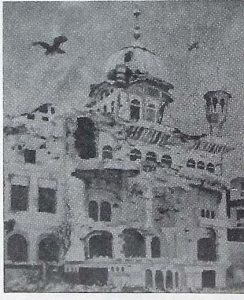