Langar Sewa By Sikh Inmates In U.S.A. At New Orleans

Langar Sewa By Sikh Inmates In U.S.A. At New Orleans 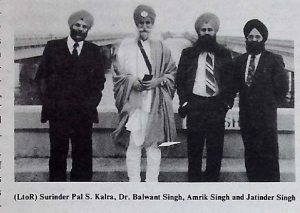 Kirtan was started at 11:15 a.m. According to the importance of the month Bhagat Ravi Dass Ji’s “Begampura Sahir Ke Noon” was sung. The following guests specially flew to New Orleans to participate in the function.

Surinder Pal Singh Kalra (Chicago), S. Amrik Singh (NY), S. Jatinder Singh (NY), Mrs. Darshan Kaur Grewal and her son from: New Jersey, Mrs. Devinder Kaur Bains (Rochester). Four families from Jackson, Mississippi, and S. Jatinder Singh Ahluwalia were present. All were introduced to the: sangat of New Orleans. S. Surinder Pal Singh Kalra shared his ideas with the sangat for 20 minutes. He said that we Sikhs have a history to be proud of. We are proud of our appearance. He then explained how the sangat of Chicago, St. Louis and Kansas protested in favor of S. Jasbir Singh Sandhu’s turban case when he was in Springfield (Missouri) hospital on his three week hunger strike. He also explained that recently when S. Jasbir Singh Sandhu was transferred from one jail to another, he had to be on hunger strike for nine days for his turban and finally won the case. Now all three, S. Sukhvinder Singh, S. Virinder Singh and S. Jasbir Singh Sandhu are near New York area in Otisville prison.

Ardas was said by S. Surinder Pal Singh Kalra and “Wak” was taken by Dr. Jasjit Singh Walia. While the Deg was being served Dr. Jasjit Singh Walia. Requested S. Amrik Singh and S. Jatinder Singh Ahluwalia to share their experience of prison with the sangat. It was unexpected and both were not prepared to say anything. However, both did excellent job. First S. Amrik Singh told that he stayed in prison for approximately one year. He told the sangat that in jail he had more time to recite Gurbani which is the strongest inspiration to keep oneself in high spirits (Chardhi Kala). Then came the turn of S. Jatinder Singh Ahluwalia. He said that the experience of jail sangat had already learnt from S. Amrik Singh. S. Jatinder Singh Ahluwalia said that according to his two years’ experience in prison, it is far better to live life like a lion for one day than to live for hundred days like a jackal.

Jatinder Singh from New York thanked the Sikh sangat of New Orleans on the behalf of Sikh sangat of New York for their dedication towards the Sikh cause. However, the love and affection of the New Orleans sangat towards the Sikh youth of New York was even more than what could have been observed. Dr. Amarpal Singh Sahni said that if he knew about the arrival of the Sikh youth from New York, he would have liked to garland them.

Guru Da Langar was then served according to Gurmaryada, as by our Sikh inmates. The chief hosts Sardarni and Sardar Balwant Singh from Pascagoula, Mississippi, along with a team of other sewadars, were really busy in serving the langar.

Article extracted from this publication >> March 4, 1988