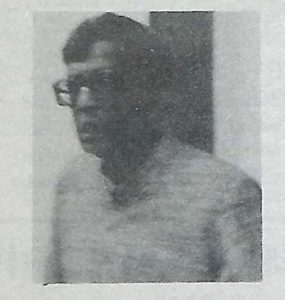 BERKELY, Ca.: Mr. Rajni Kothari, Prof. of Political Science, Delhi University, and winner of the Right Livelihood Prize Sweden, 1985, spoke at a reception organized by representatives of various Sikh organizations of North America at Oakland and at the seminar arranged by the Indian Students Association of U.C. Berkely, (A.S.U.C.), on April 11, 1985, at Berkley.

Mr. Kothari denounced the Misra Commission Report and called it a shameful effort to cover up the role of Congress (I) in the anti-Sikh violence.

“The organized unabated violence against the Sikhs that rampaged through Delhi and other Congress (I) ruled States for three days claimed over 3,700 Sikh lives in the capital alone”, he said. Prof. Kothari, the author of the book, “Who Are the Guilty” and former President of the People’s Union of Civil Liberties in India (P.U.C.L.), asserted that the Misra Commission could not contradict or deny the findings of the P.U.C.L. The study by P.U.C_L. had blamed several top ranking Congress (I) leaders of Delhi for their participation in organizing violence against the innocent and un expecting Sikhs.

Prof. Kothari charged the Congress (I) Mafia, headed by H.K.L. Bhagat and Jagdish Tytler, the Ministers of the Central Government, who were named as the instigators by the P.U.C.L. report. of intimidating and trying to silence their opponents. However, he assured his listeners his continuous struggle against repression, injustice and State terrorism.

The human rights leader ridiculed the State and Central Government, and media for projecting that no other crime was committed in the State but terrorism. He accused Rajiv Gandhi and. Surjit Singh Barnala for unleashing the State terrorism and staging fake encounters which he termed as the “root cause” of the continuous unrest in the State of Punjab. He also held the Congress (I) Mafia responsible for engineering, sporadic killings in the State to malign the Sikh cause. He offered to present a conclusive evidence to support the charge that innocent people are being killed by the police in the staged encounters.

Mr. Kothari lambasted Rajiv Gandhi for his shortsighted policies of creating rifts among the Sikhs for the short term political gains. He cautioned the government against divisive tactics in settling the Punjab problem. He asserted that no splinter group, favored by the government, can assure a peaceful solution to the Punjab issue. He opined that only the collective and unified Sikh leadership including A.IS.S.F. and Damdami Taksal will have the clout to carry the Sikh masses for any possible agreement.

He praised the efforts of Chief of the Akal Takht, Singh Sahib Prof. Darshan Singh Khalsa for bringing various factions of the Sikhs under one banner. He lashed out at the government and the media for creating biased and black color impressions about Singh Sahib’s unity efforts.

Speaking on the “Communal Polarization in India today” Prof. Kothari squarely blamed the ruling Congress (I) leadership for using one community against the other for opportunistic power survival. This game, he said has outlived the momentary political benefits as it is evident from the serious consequences India faces today. “The present situation” he added, “is so grave that Hindus and Muslims are practically sitting at each other’s throats. He blamed the high class Hindu fundamentalists for their involvement in killing not only the Muslims and Sikhs but also the other minorities in other various parts of the country. He made a strong plea to all the oppressed minorities to join hands to counter the chauvinistic trends of the ruling Congress (I).

During the question and answer session, Dr. Sukhminder Singh, President of the North America Akali Dal appreciated the sincere efforts of Mr. Kothari in bringing out the truth in the form of a report on anti-Sikh riots. However, he categorically stated that the injured Sikh psyche will never be satisfied short of Khalistan.

Dr. Gurinder S. Grewal of Tracy, Ca. lauded the guest of honor for his exemplary courage amidst the anti-Sikh hysteria created by the ruling mafia. He also thanked Prof. Kothari for presenting the true picture of the situation in Punjab, however, he added that in the light of the past experience, the Sikhs interests could only be safe guarded in an independent

State of Khalistan. Mrs. Gurbax K. Kahlon, the co Whatever pleases Him, He performs Orders from none, He takes ordinate of the program at the morning reception thanked the Chief Guest and assured every help for his crusade against repression of the Congress (I).