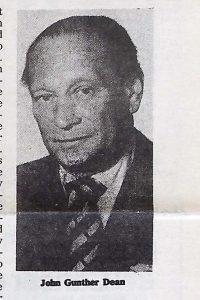 Washington: President Reagan has named John Gunther Dean, the United States Ambassador to Thailand, as the new U.S. envoy to India. Reagan has made Dean’s appointment disregarding the recommendation of the State Department officials who favored the appointment of another career diplomat. Mr. Dean’s appointment was actively solicited by the White House Deputy Chief of Staff, Mr. Michael K. Deaver, State Department sources disclosed. Mr. Dean, said the sources, very eagerly lobbied for the assignment. The sources also disclosed that the State Department was quite sore at the way a career officer had lobbied directly with the White House rather’ than through State Department channels. The post was first offered to the former Senator Charles H. Percy of Illinois. After Percy turned down the offer, State Department suggested the name of James W. Spain, a career diplomat with experience in South Asia and Africa.

Mr. Dean has held various diplomatic positions in France, Laos, South Vietnam, Cambodia, Denmark, Lebanon and Thailand. He will be replacing Harry G. Barnes Jr., who is scheduled to become Ambassador to Chile. The announcement of Dean’s appointment is scheduled for the next month. Mr. Dean will be going to Delhi at the crucial juncture of Indian political scene. Rajiv Gandhi’s sweeping victory and his inexperience has made the Delhi post important.

Article extracted from this publication >> January 18, 1985