Berkeley, California — S. Ganga Singh Dhillon, a prominent protagonist of Khalistan sovereign Sikh State, was selected President of the WSO’s U.S.A. Wing in the concluding session Sunday of the two-day convention of the Organization held at the Merriott Inn, Berkeley. The convention was a resounding success. It was attended by nearly 140 delegates representing over 7,000 active members from all over America. Contingents came from New York, Boston, New Jersey, Chicago, Cleveland, Seattle, Houston, Cincinnati and major towns of California.

In the opening session Saturday speakers analyzed the sad predicament of the Sikhs and suggested possible courses for the protection of their threatened identity. Indian government’s continued hostility and its efforts to exterminate Sikhs were condemned and countries committed to freedom and democracy was exhorted to use their influence and pressure in ending Sikh sufferings. There was complete unanimity over the objective of carving out a sovereign Sikh State.

The afternoon session Sunday turned out to be quite tumultuous because of the election/selection of delegates to the National Council and General Assembly and office-bearers for the National Council. 72 nominations were received for 31 vacancies of delegates. After scrutiny 58 were found in order. Repeated appeals for electing a unanimous team had more than desired effect resulting in the withdrawal of 34 candidates. Subsequently resignations of 24 elected persons also followed in order to evolve a consensus. S. Giran Singh Sandhu, President WSO Canada Wing was authorized to draw out the list in consultation with Gen. Bhullar, S. Ganga Singh, S. Didar Singh, S. Sulakhan Singh, S. Karamjit Singh, (Cont. Page 6, Col. 1) Bibi Gurbax Kaur, Dr. Kuldip Kaur, and Bibi Amrit Kaur. After prolonged discussions the following list was drawn up and approved by the House. 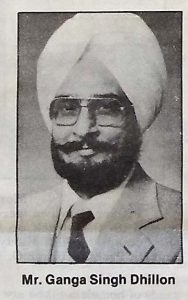