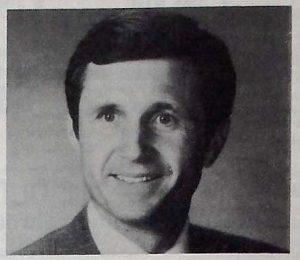 “The time I’ve spent as your Representative in Washington has been the most challenging and the most rewarding period of my life”, Herger said. “I want to keep working and keep getting results for you”.

Now completing his first term in the House of Representatives, Herger listed as major accomplishments his winning a seat on the Agriculture Committee, his election as the only freshman in the 100th Congress to serve on a joint House/Senate Conference Committee which hammered out legislation on major elements of the 1988 federal budget, and his work to provide relief for victims of last summer’s widespread forest fires.

“During my first days in Washington, I fought for and won a seat on the House Committee on Agriculture whose decisions are so important to our area’s farming and timber economy,” he noted. “From that position I have worked to promote more sensible trade policies and increases exports of our agricultural products abroad”,

“My accomplishments as a member of the Agriculture Committee were subsequently recognized by the leadership of the House which selected me as the only freshman Congressman to serve on a joint Senate/House Conference Committee which hammered out legislation on major elements of the 1988 federal budget,” he continued.

Herger stated that service to the people of the second Congressional District has been and will remain his top priority.

“When the disastrous fires hit our area last summer, I went to work with local elected officials to coordinate relief efforts and provide both immediate and long term assistance to our neighbors who were victims of that tragedy”, he explained.

On the national level, Herger listed control of federal spending, reduction of the budget deficit, and sustaining job creation and economic growth as his chief goals.

“When major tax increase legislation and the biggest spending bills ever to come before the Congress were enacted last year by a single vote, I voted no,” he said. “It was frustrating to come that close and fall just one vote short, but we spent a message to the “politics as usual” big spenders that the fight is far from over. We cannot afford to send back to Congress someone who would make the big spenders job an easier one”.

“With your help, I want to return to Washington to insure that the people of the Second District have the kind of effective and aggressive representation they deserve and that taxpayers across the country have a strong voice and a strong vote against the taxing: and spending policies which threaten our economy”, Herger concluded.

Herger won the night to succeed retiring Congressman Gene Chappie by carrying all twelve counties in the second Congressional District in the 1986 general election. At the time of his election to Congress, he was completing his third term as a Member of the California State Assembly where he served as Vice Chairman of the Agriculture Committee and as a member of the powerful Ways and Means Committee. Herger served as an elected member of the East Nicolaus High School Board of ‘Trustees prior to his election to the State legislature. A third generation Sutter County Cattle rancher, Herger and his wife Pam have eight children,