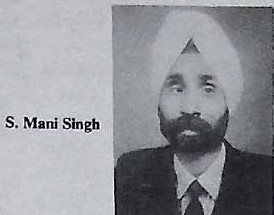 NEW YORK, NY: The bhog of a Path, the recitation of Guru Granth Sahib, in the memory of S. Mani Singh was held at the Richmond Hill Gurdwara here on Sunday, June 26. Over a hundred people attended the ceremony in the honor of the departed soul. The gathering was sadder still because of the news of the untimely and sudden demise of another Close family member after S. Mani Singh’s death.

Mani Singh was the father of S. Devinder Singh Saini the assistant treasurer of Sikh Cultural Society. He passed away on June 17. He was 71. He leaves behind his wife Bibi Gurbachan Kaur, three sons and a daughter.

Devinder Singh’s brother in law S. Gian Singh died of an electric shock by coming in contact with a water cooler in New Delhi in India on June 24. He is survived by his wife, S. Devinder Singh’s eldest sister, and three young children.

Giani Gurdeep Singh, Head Priest of the Sikh Cultural Society, performed the ardas for the departed souls and prayed to God to grant the family strength and fortitude in facing the circumstances created by this great loss.

Earlier he had performed the last rites and the ardas for the departed soul of S. Mani Singh at the Lynch Funeral Home on June 20. The mortal remains had then been consigned to the flames at a local crematorium.