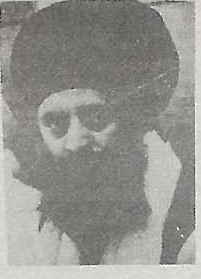 The Jathedar of Akal Takht Singh Sahib Bhai Jasbir Singh, who was released by the Union Government along with four other head priests on Friday, defined the goal of Sikhs as “Puran Swaraj” (total freedom) for the Sikh community.

Talking to newsmen at the Darshani Deodi of the Golden Temple at Amritsar, the Akal Takht Chief Bhai Jasbir Singh said it was now for the government of India to decide if it wants to give such freedom within the country or outside it. He further declared that their role would be only a religious one. If the government intends to talk on any political settlement, it could be done between the government of India and Sikh quom (nation), he added. Bhai Jasbir Singh gave an indication of taking a role of a mediator when he said that neither the Akalis nor the boys were a bad lot. The need of the hour is to bring them together, he said, when asked by a newsman if the Akali leadership has not become irrelevant. He felt that a solution to their problem can only be at the initiative of the Centre, which should aim at removing all irritants and hurdles which stand in the way of settlement. He denied that he had held any talks with the Centre, while in jail.

At the airport, Singh Sahib Bhai Jasbir Singh was received by his grandfather, Baba Joginder Singh, a senior U.A.D. leader, Baba’s son Harcharan Singh Rode, Dr Rattan Singh, an Akali M.L.A. and Sant Ajit Singh. The security forces escorted them up to Cloak Tower Chowk. Inside the Golden Temple there was a big display of

Joy. About 80 freedom fighters led by Bhai Nirvair Singh, acting Jathedar of Damdama Sahib, gave a virtual guard of honor by firing at least four hundred bullets, brandishing their weapons and armory in an apparent display of strength, which included sophisticated and modern type of arms. The freedom fighters kept on firing for quite some time; the same was repeated on the arrival of Singh Sahib Bhai Gurdey Singh Ji Kaunke. The security forces around the temple stood helplessly. The freedom fighters, mostly in their twenties stood in line in front of the Akal Takht and gave salute to Sant Jarnail Singh Bhindranwale by firing in the air.

Later, all the five Singh Sahibs went to the Golden Temple and Akal Takht to pay their respect to the Guru Granth Sahib. At Akal Takht, the Singh Sahibs were honored with surpass by Bhai Thakur Singh Ji, the acting Head of the Damdami Taksal

Bhai Gurdev Singh who later joined his other colleagues, described his arrest as an insult to the community after his appointment as acting Chief of Akal Takht.