BRAHMPURA, Amritsar, India: Akal Takht acting Jathedar Darshan Singh has demanded withdrawal of C.R.P.F. from the state. He said that if government ignores the demand the Panth will be forced to take certain steps and the government will be responsible for the consequences.

Moving a resolution on behalf of the huge gathering, Prof. Darshan Singh demanded that the guilty men should be arrested and given suitable punishment. The very presence of the communal force like the C.R.P.F. in Punjab he said, was an open invitation to state terrorism.

The congregation which was held in the village on an appeal issued by Akal Takht Jathedar to protest against December 27th, atrocities committed by C.R.P.F. The congregation unanimously condemned the C.R.P.F. for its excess. The resolution was endorsed by the gathering by the show of hands.

The acting Jathedar stressed the need for Panthic Unity which every Sikh wanted. The proof of this is in hundreds of letters I have received from all sections of Sikh organizations in the recent past, he added. Akal Takht Chief pointed out that there could be unity only if the leaders give up their ego and vested interests. Referring to certain speakers who wanted to get his appointment endorsed by Sabat Khalsa, Prof. Darshan Singh said that he has all respect for Bhai Jasbir Singh now in jail who was made Akal Takht Jathedar at the Sarbat Khalsa meeting on January 26. I will not hesitate to quit in favor of Bhai Jasbir Singh who has made more sacrifices than me. But let there be unanimity on the choice. Prof. Darshan Singh said no Sikh will tolerate the sacrilege of the holy Guru Granth Sahib or humiliation and disrespect of the women. The Sikh history is replete with stories of sacrifices made by individuals to uphold the dignity and sanctity of any gurdwara.

The gathering was a symbol of collective protest against the desecration of the Holy Book. He warned no one should play with the dignity and honor of their religion. After his appointment as the Akal Takht Jathedar by the S.G.P.C., it was the first congregation that he had convened. 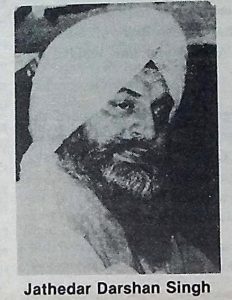 Article extracted from this publication >>  January 16, 1987